As we came around the curve, a bald eagle landed in the road right in front of us; an opossum clutched in its talons. Upon seeing us, the grand bird flew away, leaving its prey behind. Its wingspan was wider than the lane in which we were driving. It all seemed to happen in slow motion, and yet there was no time for pictures. I didn’t want to look away, even for a second, as its strong wings elevated it ever skyward. The white triangle of its tail spread wide. This was an angle I’d never seen before. It was so unexpected, and so, so close. This was nature at its most beautiful. I felt as though I had been given a special gift.

And here’s the thing: we hadn’t even arrived at the park yet. So this adventure was beginning on a high note, as if the universe wanted to make sure I was in the proper state of awe for the experience to come.

Mount Rainier looms large in the Pacific Northwest. On sunny days, I get to gaze upon it from one of the bridges where I work. I quite often get a glimpse on my commute home as well. I’d always wanted a closer look, but sensed that it would be too incredible to see alone. Some things, the most amazing things, should be shared.

According to the National Park Service, Mount Rainier is “the tallest volcano in the Cascade Mountain Range and the most glaciated peak in the continental United States.” We weren’t going to make it to the 14,410 foot apex. Many of the roads were still closed for the season, and neither of us are climbing fit. But we made it up to the visitor center in Paradise, which is at 5400 feet. More than a mile above sea level. Higher than Denver.

There are currently 25 glaciers on Mount Rainier, which is pretty impressive. But if you look at the timeline here, you can see that they’ve been steadily shrinking. This could be a very effective teaching tool about global warming, but unfortunately the entire National Park System is under a gag order thanks to our current resident in the White House, who is of the minority, self-serving opinion that climate change doesn’t exist, or at least isn’t our fault. Oh no. Can’t be. Then we might have to do something. Sigh.

So I looked at these amazing glaciers, and the accompanying waterfalls, and the gigantic old-growth trees, and realized that they would probably never again be as grand as they were at that very minute. It was a privilege to bear witness.

Thank goodness, at least, for elevation. Before entering the park, it was a sunny 77 degrees. At the visitor center, it was 44 degrees and hailing. Hail. In late May. And at the same time, steam still rises off the mountain’s crest, to remind us all that it’s still an active volcano.

Nature is the most amazing thing we have. Why are we so hellbent on destroying it? I’ll never understand.

Homeward bound, we drove back along the stretch of road where we encountered the majestic eagle, and I was pleased to see that he’d long since come back to retrieve his meal. The circle of life continues. At least for now.

I’ll leave you with these photos, which do not do the place justice, but will at least give you some idea of why I’m so in love with our national parks. 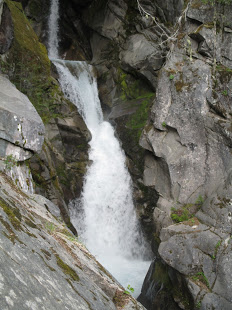 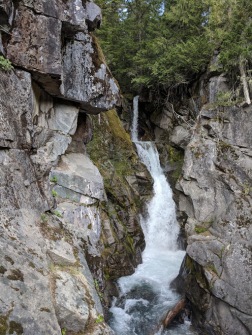