People seem shocked that the Republicans are calling for the exposure of whistleblower that started the current impeachment investigation. I’m not. People hate those who blow the whistle on their team. I know this because I’ve blown a whistle or two in my lifetime. It never went well for me.

The idea that this whistleblower is some sort of a rat, or a troublemaker, or a liar, is outrageous. I think this person is a hero. Anyone who sees something that’s morally, ethically or legally suspect, and speaks up about it despite all possible repercussions, is admirable. It takes courage.

And make no mistake, this person is not dictating what happens with the information he or she put forward. That person simply identified a situation that seemed wrong, brought it to the proper authorities, and those authorities are now in charge of investigating those allegations. It’s that simple.

That the Republicans are trying to imply that keeping this person’s identity a secret is some nefarious conspiracy by the Democrats is absurd. It’s. The. LAW. And for good reason. If you start exposing whistleblowers, then no one will have the courage to speak up when they see things that they feel are wrong.

I’ll tell you the point. The Republicans are anxious to have a scapegoat to deflect attention from the questionable behavior of Trump. They can’t afford to have us look at Trump too closely at the moment. We might notice that the emperor has no clothes.

June 27th is National HIV Testing Day here in the US. You didn’t know that? Neither did I. It really should be advertised a lot more, because it’s really important. In point of fact, every day should be National HIV Testing Day. I sort of stumbled onto it because a very dear friend volunteers as an HIV counselor, and I just happened to pick that day to go to the test site to meet him for lunch.

Off we went to a salad bar and we were chatting about various and sundry things. He touched upon the HIV testing aspect of his life in general terms. He takes confidentially extremely seriously, as all the counselors do. So mostly I had an interior conversation with myself on the topic.

“Should I get tested? I’d like to think I’m pretty low risk. I’m 48 and in a committed relationship, but can I say with one hundred percent certainty that my partner has always been faithful and safe? Can anyone, really? Twenty percent of the people who have HIV don’t even know they have it.”

So I asked my friend what he thought. I didn’t want to take resources away from someone who needed it more. The test is free, after all. But his opinion is that if you are even remotely at risk, having the test is a good thing to do. And when you think about it, you’re doing it not only for your own peace of mind, but also to be responsible and protect your partner. So when we got back from lunch I got tested.

Obviously my friend couldn’t counsel me because a lot of personal questions are asked, and he wanted me to be comfortable being forthright. So I had another counselor. The test itself is very easy. They don’t draw blood or cause pain or have to see any body parts or anything. It’s just a sort of a spongy swab on a stick that you hold against your inner cheek for 3 minutes. Simple.

While that’s going on, they ask you questions to determine your risk factors and the ways they can suggest that you reduce that risk. It’s in your best interest to be honest. And believe me, you’re not going to shock them. They’ve heard it all.

Naturally they urge the use of condoms, and can teach you their proper use if necessary. And incidentally, you can always get free condoms at these test sites. There’s no reason that you should ever use the cost of condoms as a deterrent in their use. Female condoms are also available. And here in Jacksonville, at least, you can be confidentially tested for free at any testing site as long as you are at least 13 years old. Any younger than that and you need a parent or guardian to be present.

They discuss a lot of other interesting things, such as the proper way to sanitize your sex toys. I never thought about their potential role in HIV transmission, but that’s a good reason in and of itself to get counseled. There’s always something more you can learn.

Another thing I learned is that HIV no longer has to be a death sentence. We’ve come a long way since 1985. The available medications are greatly improved, and there’s a possibility that you could die of old age or some other malady before HIV kills you off. Which is not to say it still isn’t something to be taken seriously. Every situation is different.

Getting tested is a mature, responsible and loving thing to do for yourself and those around you. I always look at people who have unplanned pregnancies and I think, “You’re lucky that pregnant was all that you got.” So if you won’t do it for yourself, do it for the ones that you love.

The point of all of this is: Don’t be afraid. Get tested.

So I drove away still feeling that I would be HIV negative, and I knew I’d find out in 3 days. But I did get to imagine what it would be like to be HIV positive. That was sobering. It’s not necessarily terminal anymore, but it’s still life changing. And it also made me realize that there are situations I should probably take more seriously than I have in the past. If I learned nothing else from this experience, I learned that.

So I went back for the results the other day and I am, indeed, HIV negative. No big surprise, but I still heaved a sigh of relief. Even if the worst had happened, I wouldn’t regret having taken the test. Knowledge, after all, is power.

It bears repeating. Don’t be afraid. Get tested.

What? You didn’t seriously think I was going to tell you one, did you?  Well, actually, in this day and age when people have 600 friends on Facebook, 570 of whom they’ve never met, and in spite of that fact they post the most intimate, personal things about themselves, I don’t suppose it’s that big a stretch to suppose that I would.

I knew a young man whose wide open Facebook page gave you the following information: His high school and the year he would graduate, which tells you his approximate age. About a million pictures of himself. His sexual orientation. A very personal and public letter to someone that indicated that he was EXTREMELY sexually active. The town in which he lived, which has a population of about 200 people. And then one day he posts that his parents were taking a trip out of town. I’m amazed every pedophile in the tri-state area didn’t converge on his house. Among his 600 friends, how many of them could be trusted? He couldn’t possibly know for sure.

When I pointed all this out to him, he said, “I have nothing to hide.” And yet, his planned career path is one that requires confidentiality. Employers check Facebook. Based on that, no one is going to hire him. It breaks my heart.

The more life experience you have, the more you realize that secrets don’t get kept. That’s why conspiracy theorists amuse me so much. Do you honestly think that entire government agencies are capable of keeping extremely volatile and scandalous secrets for all eternity without a single person leaking information? People are not automatons. You can’t punch a set of commands into them and expect no one to deviate. We’re more like ducklings who will scurry off in every direction without any obvious reason. Anyone who believes humans are capable of the level of efficiency and unity of thought and opinion that would be required to maintain a conspiracy is, frankly, kooky.

And have you ever noticed that these conspiracy theorists never seem to participate in any wide open movements for the common good or take the lead in movements for positive change? They are entirely too busy assuming that everyone is diabolically evil and that their personal duty is to convince everyone who will listen that they are the only ones who know the truth. This level of paranoia is a sickness. It’s like voluntarily marinating in a vat of toxic waste.

My response to these people is, “So you’re aware of a problem? Well, unless you’re going to come at me with a solution and actually take an active part in it, don’t waste my time. I have no need for your stress and anxiety. This constant state of hypervigilance without positive resolution does no one any good.” 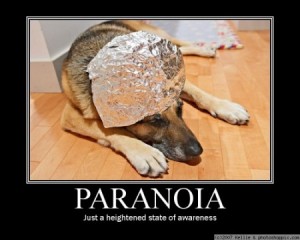