For most of my life I was without a spiritual home. My mother was a member of the Congregational Church, but I can only remember setting foot inside one a handful of times as a child. As devout as she was, as a single working mother her time and energy were limited. I remember her trying to get me to go to Sunday school one cold Connecticut winter day, and we walked about a block and then turned back. It was too cold and I was too resistant to the idea. I think my mother gave up on the concept for me at that point.

Even with my limited experience with Christianity, I knew it wasn’t a good fit for me. It just never felt right. It didn’t feel logical or like a valid part of my everyday life. It always seemed out of date and based on the knowledge of the world as it was 2000 years ago. We know so much more now. What did the words of Jesus, however wise they might have been, have to do with a world in which we’ve walked on the moon and can talk instantly to someone on the other side of the planet?

That’s the thing, though. In many religions, including Christianity, I do find pearls of wisdom. In many ways that only adds to my confusion, because I’ve also seen the dark side of religion. The intolerance. So many religions assume that theirs is the only way to salvation. If you don’t believe exactly as they do, then you’re not one of the chosen, and you’re going to hell.

I can’t subscribe to the notion that a Bushman of the Kalahari, for example, who follows the religion of his parents, is condemned to hell by virtue of the fact that he was born in the “wrong” place, to the “wrong” people. I just can’t buy it. And if it is true, it’s not something I want to be a part of.

Why does my spiritual path have to be the only right one in order for it to be valid? That seems too simplistic to me. There’s too much variation in nature for there to be no room for a variation in philosophy.

So I cast about aimlessly for many years, feeling kind of alone in the wilderness, until finally I found Unitarian Universalism. In this conservative religious world of ours, I find a liberal, all-inclusive church to be a refreshing change indeed. The UU Church believes, as I do, that there are many paths to the divine. On any given Sunday you might find yourself amongst UU Humanists, UU Christians, UU Pagans, UU you-name-it-they’ve-got-it.

For me, most of all, Unitarian Universalism seems to be a place where people who have experienced mainstream religion and have been turned off by it, but still want community and fellowship, can find a home.

And lest you think we’re some lunatic fringe group, here are some Unitarians, Universalists, and UUs you may have heard of:

So what is a typical service like? There isn’t one, really. We often discuss various religious philosophies, cares and concerns, current events, or basic concepts about everyday living. Here’s a list of topics that were discussed in various UU churches recently:

One thing that can be quite disconcerting about a UU Church is that rather than adhering to one dogma or creed, rather than being expected to conform or walk in lockstep with all the people around you, we UUs can’t seem to agree on ANYTHING. But the beauty is that we respect each other’s right to disagree. Here is something we all agree on, however. The seven UU Principles.

Because most Unitarian Universalists find it unpalatable to recruit people, or risk being perceived as trying to convince people to change their ways, you won’t hear much about our religion. Not from us, anyway. We are loathe to cram anything down your throat. But you are always welcome to come to a service and form your own opinion. To find a congregation near you, go here. 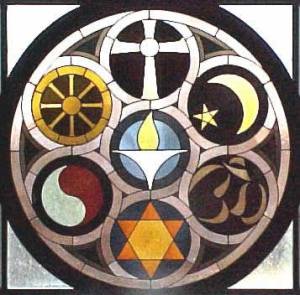 7 thoughts on “On Being a Unitarian Universalist”