As if this Barbie doll didn’t already come with a ton of accessories (glasses, compression socks, night guard…) I now use a CPAP machine. Heaven help me.

CPAP stands for Continuous Positive Airway Pressure, and it’s a device used to help you breathe at night if you have Sleep Apnea. Which I do. Big time. According to my recent sleep study, I stopped breathing entirely 8 times during the night, and I had 225 hypopneas, which are shallow breaths that represent an airflow decrease. Good grief. No wonder I’m always so tired. Every night I’ve been fighting for my life.

It’s not like I didn’t already know this. I snore. And I had a sleep study about 15 years ago that indicated that I had sleep apnea, but this was before Obamacare. I had no insurance and couldn’t afford the machinery. So I had to just take my chances.

That, and I’ve known a bunch of people that have gotten sleep apnea machines and given up on them in sheer frustration. One friend sleeps hot, and his mask kept filling up with sweat, so he was constantly waking up feeling as though he was drowning. Another was a stomach sleeper like me, and could not get comfortable. A third nearly strangled herself with the air hose. And a fourth had her mask destroyed by her dog.

I’ve been living with this alien on my face every night for about a month and a half now, with mixed results. Once, I woke up with my heart pounding, absolutely convinced that I was suffocating. I ripped the mask off, but I was awake for several hours before that sensation of utter panic left me.

Another time, I woke up completely unable to exhale. The thing was blowing so hard that my mouth was blown up like a chipmunk trying to carry too many nuts. Oh, I was getting air that time. Boy, was I ever. But you have to be able to breathe out, too. Again, I had to rip off the mask.

More often, though, it’s simply the fact that I’m not getting a good seal, and the air is escaping around the edges of the mask and blowing up into my eyeballs. That’s a weird way to wake up. That, and like my stomach sleeping friend, it’s nearly impossible to get comfortable.

Another unexpected side effect is that I no longer remember any of my dreams. I’m sure that has to do with the fact that I’m no longer waking up several dozen times a night. But I miss my dreams. I have a very rich inner world.

I hate this CPAP. I mean, I really, truly, completely hate it. So why am I still putting myself through this torture? Several reasons.

First of all, I’d kinda like to live. I used to think it would be nice to die in my sleep. That would be the way to go. But it turns out a lot of people have died in their sleep when they didn’t have to. I’d really rather not be one of those.

Second, I now have a husband, and he gets to watch me stop breathing. That’s got to be really upsetting. I’d like to spare him that. And he’s also a reason to try really hard to stick around for as long as I can.

But most importantly, I have to admit that I’ve never felt more rested in my entire life. Once I stop my nightly fight with the alien and allow it to assimilate me, I sleep soundly. (I don’t even have to get up to pee as often. That’s an unexpected bonus.) And when I wake up, I’m refreshed. That makes a difference. Such a difference.

So I’m going to try my best to adjust to this hateful thing. I need to be the adult in my life and make the effort. It’s for my own good. Wish me luck. 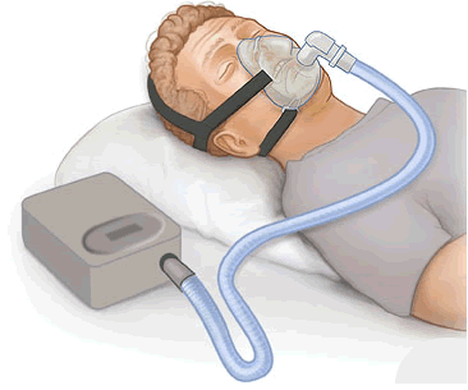 10 thoughts on “The Alien on my Face”