On our travels along the Oregon coast, the sea lion seemed to become our spirit animal. From the place we stayed in Newport, we had this fantastic view. (I can’t even seem to get away from bridges on my day off!) 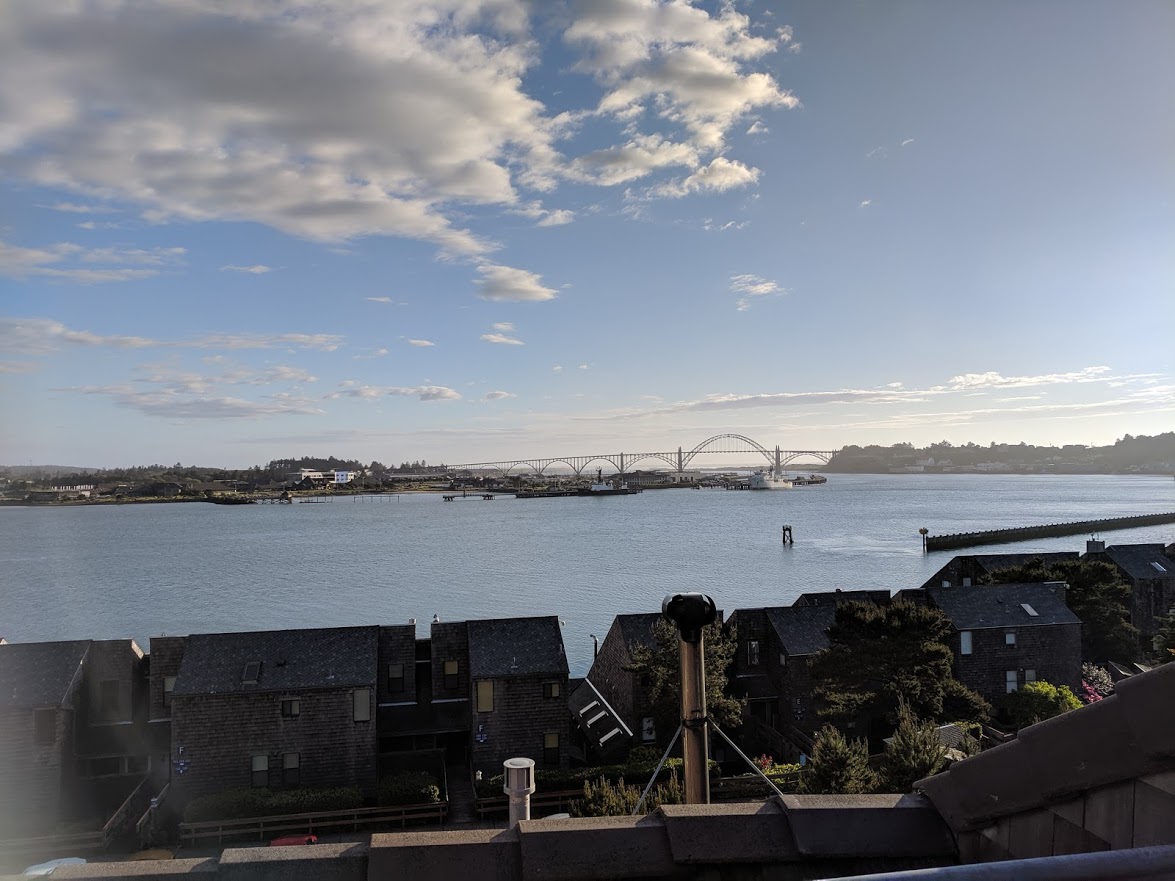 It also came with some unexpected sound effects. We could hear sea lions barking in the distance. The first night it was charming. The second night it was intriguing. By the third night (especially at around 3 am) it was kind of annoying. I don’t know how area residents stand it. But I suppose it’s kind of like living next to train tracks. After a while, you must tune the noise out, if only to preserve your own sanity. But at least trains are a little less random.

We discovered the source of the noise one evening while dining at the Clearwater Restaurant. Right outside their window you could look at one of Newport’s piers, which had been made especially for the sea lions. We got to watch a baby nursing on the center dock. It was great fun. Dinner and a show.

Incidentally, if you’re ever in Newport, I highly recommend this restaurant. The atmosphere is delightful and the food is excellent. I had the Dungeness crab and garlic noodle, and dear husband had the coconut curry stew with its halibut, rock cod, salmon, shrimp, clams, and scallops. Both were good enough to make you want to slap your mama.

But as usual, I digress.

On another day, we went south along the coast to visit the Sea Lion Caves. I’d been there once before, but it was in September, and the cave was deserted. I had high hopes this time. And there were two in there.

I thought I was going to have to settle for this picture of the statue out front.

But in fact, there were about 50 sea lions out on the cliff! We had great fun watching them. I have no idea how they get up there. Some sea lions get up to 1500 pounds. But we watched one attempting to climb up. He’d wait for the stormy sea to kind of wash him halfway up the cliff, and we’d be rooting for him, but then the next wave would knock him back into the ocean again. This happened over and over, and was exhausting to watch. No wonder the successful ones were mostly sound asleep, and showing absolutely no inclination to move.

On the day we left the coast, we stopped by the Newport pier again, in hopes of seeing the baby sea lion, but it was not there. Instead, we saw this wounded sea lion in the middle of a pile of others. I don’t know if it was a gun shot wound or it had been gigged by an irritated fisherman, or bitten by one of its rivals, but the wound looked deep.

There were other observers on the dock, but none of them seemed particularly moved to take action, so I thought, “If not me, who?”

I went over to the informational sign and saw a number for the Newport Sea Lion Docks Foundation. (Which, incidentally, is a cause well worth supporting, so I hope you will.) I spoke to a very nice gentleman who asked me if I was calling about the sea lion with the plastic around its neck and I said no. That one was nowhere to be seen. (Humans suck.)

Apparently I was the first to call about this particular wound. He said he’d have the state biologist go out and take a look. I texted him a picture. I was glad that someone was taking this seriously, so that I could continue my vacation without feeling anxious. He said the biologist will definitely intervene if the wound is serious. What a relief.

Now, whenever I see a sea lion, I’ll think fondly of my glorious holiday on the Oregon coast, and smile.

Cultivate an attitude of gratitude! Read my book! http://amzn.to/2mlPVh5