Recently, I stumbled across an article entitled “12th-Century Poem About A Virgin Arguing With Her Vulva Uncovered in Austrian Monastery”. I ask you, how could one not be intrigued? I had to read more.

It seems that this is the oldest known copy of this satire, but it is not the only one that has been found. In it, a woman is debating with her vulva about what attracts men more, it, or the woman’s general physical appearance. (I don’t think that question has been answered definitively, even all these centuries later.)

What fascinates me most about this poem is that there was obviously a frank discussion about sexuality even back in the 12th Century. We seem to hold two contradicting notions in our head: Ancient peoples were devoid of morals and self-control, whereas we are more sophisticated (read: prudish) now. But at the same time, we look back at past history, at least in the European, Christian sense, and tend to believe that humans have become more open, less conservative, over time. Clearly neither theory tells the whole story.

If you look at art through the centuries, you’ll see that there has always been a fascination with genitalia. Most historians nervously attribute these things to fertility, the need to procreate, and take the sexuality out of it.

According to this article, sex toys have been found that date back 28,000 years. So who’s to say that fertility statues weren’t also used for pleasure and visual titillation? I mean, come on. Most of us appreciate a little stimulation now and again. Do we really think pornography originated in the 1900’s? Do we think the more artistic depictions of all things taboo began with Georgia O’Keefe?

We also seem to want to quash the fact that once upon a time, women were considered powerful by more than just those of us who are woke. (Women can create men inside their own bodies. The reverse cannot ever be claimed. That’s magical.)

This article discusses a variety of artistic depictions of female genitalia, including sculptures of the sacred yoni in Hindu art, Venus figurines that are at least 35,000 years old, and Sheela-na-gig carvings of women with exaggerated vulvas that are found throughout Europe.

Further, Baubo figurines were popular in ancient Greece. They were often depicted as a naked headless body with a female face emerging from the torso, and a vulva on the chin. Hmmm.

In the Palauan archipelago, one could often find Dilukai, or carvings of women with their legs splayed open, above the doors of the houses of the chiefs. These were said to be sacred carvings to ward off evil, and symbolize fertility and spiritual rebirth. But missionaries tried to claim they were there to shame immoral women. (I suspect that what went on in the chief’s house had little to do with lessons in morality.)

It is even said that the Vesica Piscis, an almond-shaped symbol that appears all over the place throughout history, including in the ancient Christian fish symbol, is actually a depiction of the female vaginal source of creation.

Personally, I see no reason to cast shame upon those who believe in the sacred female, nor should we feel shame about the body parts that have allowed all of us to walk upon this earth, nor in the urges that have caused us to make use of said body parts. More power to us all. 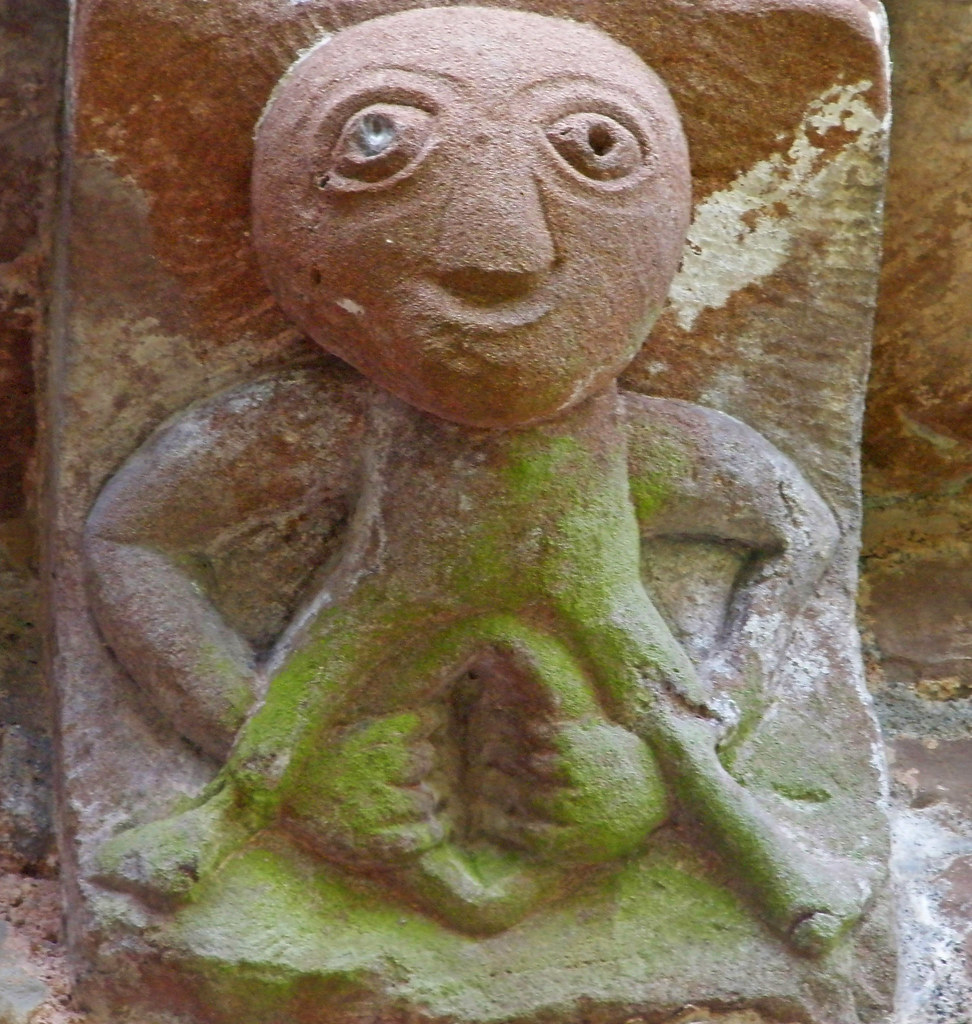 A 12th-century Sheela Na Gig on a Church in Kilpeck, Herefordshire, England

11 thoughts on “We Have Always Had Needs”