I am on the horns of a moral dilemma. I believe very strongly in free speech and freedom of the press and freedom of expression. Nothing angers me more than a book burning, or a school board that requires teachers to avoid teaching things that are science-based. I am usually the first to read a book if it gets banned.

Because of all the above, it kind of makes me squirm that, ever since I started my Little Free Library, I have been actively participating in censorship. It’s true. I have. And I will probably continue to do so.

Ugh! I’m going to hell in a handbasket.

The way a Little Free Library works is that people can take books and keep them as long as they want. They can return them, too, or they can bring other books. Most things are welcome. But some things I have to remove.

I look at myself as the curator of my library. Just as museums have curators who determine what exhibits they will display and what image their museums shall project to the world, I, too, am in control of the types of messages I put out there in my library. Being a steward is a service that I’ve voluntarily provided, and it is, after all, located on my private property.

But this censorship thing is kind of a slippery slope, and one that I never thought I’d be sliding down. It all started with the pizza flyers that someone stuffed in my library. I’m not here to advertise for local businesses. Those flyers went into the recycle bin, and I didn’t feel bad about it at all.

I also know I wouldn’t feel bad about pitching any pornography, were it to appear. My little library is often used by children. Can you imagine if little Johnny came home with a Penthouse magazine and Mom found out he got it from my box? No. Not appropriate at all.

I also get rid of books that are in poor condition. If the spines are torn off, for example, they get sent to Goodwill. I don’t want to be the dumping ground for everyone’s garbage books. That, and no one will want to take a disintegrating book to read, so it’s just taking up much-needed space. I also get rid of moldy books and ones that reek of cigarette smoke. I don’t want to trigger someone’s asthma. Again, these are situations that don’t feel morally ambiguous to me.

But here’s where it gets a little sticky. I’ve also donated religious books to Goodwill. I’m all for seeking your own spiritual path, but there are other sources for this information. I don’t want to proselytize, either purposely or by accident. It’s just not in my nature. I also know that the people in my neighborhood participate in a wide variety of religions. I don’t want anyone to feel alienated. Maybe I’d include a book on comparative religion, if it wasn’t promoting one philosophy over another. I don’t know.

I’ve also been avoiding putting blatantly political books out there. Mostly the books I’ve come across have been in alignment with my point of view, but if I put those out there, then I’ll have to put out ones I actively disagree with, and that would make me cringe. So, further down the censorship slope I slide.

Since I started my Little Free Library, I’ve met a lot of LFL stewards online. They’ve shared a multitude of moral dilemmas that have made me realize what a complicated task I’ve taken on.

For example, one steward received a children’s book which said, “For Boys Only” on the cover. I don’t think I would include this book in my library. I don’t want to participate in making girls feel as though there are things they cannot do or read.

Another steward discovered a bunch of anti-vax literature in her library. No. No. A thousand times no. I will not actively participate in spreading false information that could potentially lead to death. I refuse. This information has been debunked by the scientific community, so I’m not spreading it. I could not share literature that denies climate change for the very same reason.

Another steward received a copy of Hitler’s Mein Kampf. In a world that is experiencing a shocking escalation in hate crimes, would I want to put that lunatic’s poorly written, hateful ramblings out there? Hell to the no. While I think this is an important book, for researchers and historians and people wanting to learn about hate without being sucked into it themselves, it requires context. I am unable to provide that context, and so it wouldn’t be included in my library.

I’ve had my library for less than two months, and I’ve already come a long way from simply tossing out pizza advertisements. Rest assured, there are plenty of amazing books in there. I get excited every time I look. Reading enlivens me. It’s an adventure.

But here’s what is making me lose sleep: Where do I draw the line? Who am I to sit in judgment? Do I have the right?

What do you think? 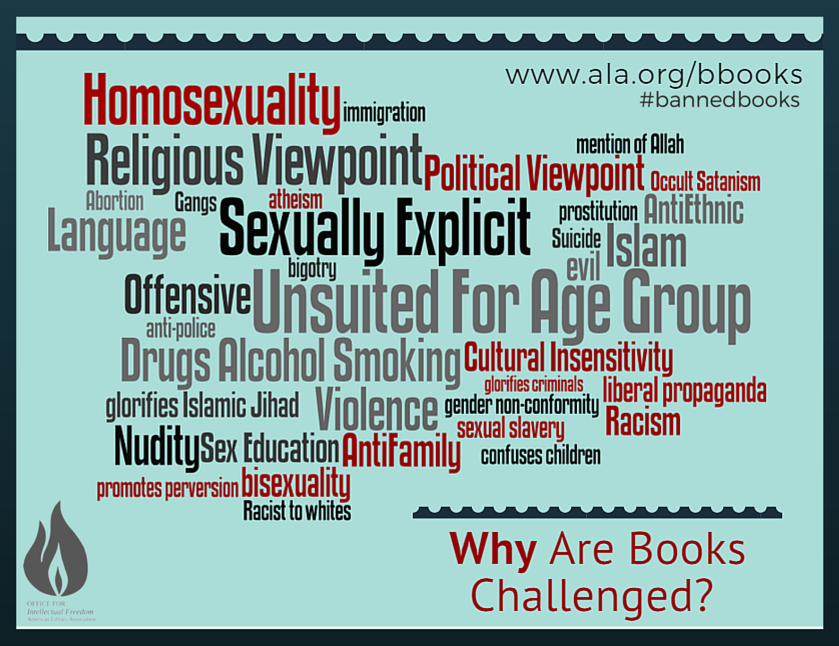