My whole life, I’ve been intrigued by Denali, even when it was still called the much less exotic Mt. McKinley. I have always wanted to lay my eyes on the tallest peak in North America. But the interior of Alaska seemed forever inaccessible to me.

That is, until this month. This month, I went to Alaska. And I refused to go to Alaska without paying homage to “The Tall One”, Denali.

Denali is 20,310 feet high. That’s hard to wrap my head around. That’s more than 3.8 miles high. Miles. And the National Park that surrounds this mountain is 6 million acres of undeveloped land. That’s bigger than the state of New Hampshire. And the crazy thing is, there’s only one road.

And believe you me, that road is treacherous. It’s so scary bad, in fact, that private vehicles are not allowed beyond milepost 15. That’s disappointing, considering that the road is 89 miles long. (By comparison, New Hampshire has 33,328 lane miles in a smaller area.) But limiting access like this also helps keep this park wild and natural, so for me this roadblock is well worth it.

To go beyond milepost 15, you have to take one of the park’s buses. There are several options. There’s a free, unnarrated one with limited access, an unnarrated transit one, which takes you from one park facility to the next, or there are several tour bus options, including the Tundra Wilderness Tour, which takes you as far as the Stony Hill Overlook at milepost 62. That’s an 8 hour, round trip tour, which tells you a lot about the state of the road, and also allows for the fact that your guide will stop a lot, and by that I mean A LOT, to allow you to take pictures of all the wildlife you’ll encounter.

The buses were a disappointment, though. They were school buses with ever-so-slightly upgraded seats. The windows kept falling open, letting in the frigid air and the road dust. I felt every bump in the road. Even if you had been the size of an elementary school student, you’d have still felt there was not enough leg room. But the place made it worthwhile.

And then… Denali. We joined the 30 percent club. Since the peak is so tall, usually most of the mountain is shrouded in clouds, so only 30 percent of the park visitors get a chance to see it with their own eyes. But we had a bright, clear, sunny day, apparently the first one they had had in weeks, and there it was, rising up to greet us, almost as if it knew I had been waiting for this my entire life.

And I’ll leave you with one final note. I’m so glad this glorious mountain is no longer called Mt. McKinley. It was first called that by a gold prospector who admired President-elect McKinley, and then after the president was assassinated in 1901 the name caught on. There has been controversy over that choice since well before the park was even established back in 1917. The State of Alaska itself has been pushing for the name change since 1975, but was continually blocked by the Ohio delegation in congress, because Ohio was the state that McKinley was from. Nevermind that McKinley never stepped foot in Alaska. (We’ll also probably never be able to do away with the useless penny because Illinois, the Land of Lincoln, will never stand for that.) The mountain only got restored to its earlier, Athabaskan name in 2015, and I’d say it’s about time.

If you ever get the chance to see Denali, do whatever it takes to do so. Its vast beauty will transform you. Here are a few of our pictures from our visit. 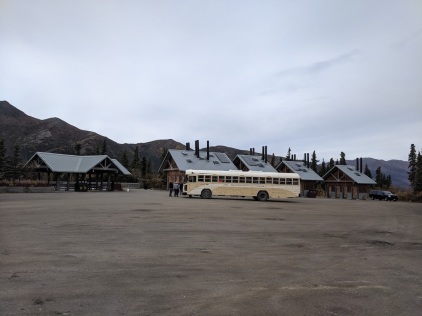