After my visit, via the cruise ship Noordam, to Glacier Bay, we had the opportunity to visit three towns along the Inside Passage, in Southeastern Alaska. It was a great deal of fun.

Our first stop was Haines, Alaska. This place has less than 2000 residents. It’s a sleepy little town, and seems to be rather overwhelmed when a cruise ship docks. Many of their shops are actually owned by the cruise ship companies, which is why a lot of the souvenirs seem identical from store to store. Most of these places shut down completely when the cruise season ends.

Haines experienced a boom during the Klondike Gold Rush, but of course that couldn’t be sustained. It’s just too remote. It was also the home of Fort William H. Seward, which is now a National Historic Landmark, but most of the few remaining buildings are privately owned, and frankly, you would never know it used to be a fort unless you were told. There’s also a Hammer Museum in town, oddly enough, but we didn’t visit. The most interesting thing about Haines is that from October to February, it has the largest concentration of bald eagles in the world. If you are into the great outdoors, Haines is the place.

Here are a few pictures that we took of Haines. Keep scrolling beyond that to learn a little about Juneau. 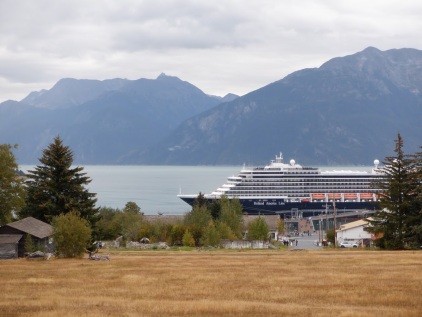 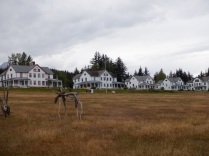 Juneau is Alaska’s state capitol, and it’s a very unique place. You can only get there by plane or by water, and the Alaskans seem to like it that way. Their politicians are not nearly as pestered by lobbyists as are those in other states, or so they say. The only other state capitol that you can’t get to by highway from other states is, of course, Honolulu.

It’s the second largest city in the US by area, but it only has a population of about 32,000 people. I was shocked about the city’s area size, because I lived in Jacksonville, Florida, for decades, and was always told that it was the largest city by area in the world. In fact, it’s the 5th largest in the country. The other 4 are in Alaska, because, let’s face it, they’ve got nothing but space. But Jacksonville has three times more population than those 4 cities combined. I digress.

While visiting Juneau, we rented a car for a few hours and took a trip to Mendenhall Glacier. It was heartbreakingly stunning. It had retreated so much that the National Park Service had to actually move the visitor’s center so that it would still be visible. But it continues to retreat. Global climate change exists, y’all.

I think the coolest place in all of Juneau is the Red Dog Saloon. You walk in and your feet sink into the sawdust. The place is lousy with Alaska memorabilia, and you really get a sense of what the it must have been like when this was an unregulated frontier town. 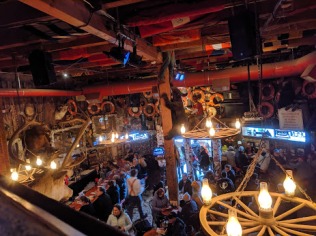 The next day, we arrived at my favorite of the three towns: Ketchikan. It is known as the rain capitol of Alaska, as it gets 153 inches a year, and on this day it did not disappoint. It was coming down in buckets. But squelching around, huddled under an umbrella, was so worth it, because this town has a ton of personality.

I loved Southeast Alaska. I don’t think I could live there, though. The weather, the isolation, and the dark, moist, dreary skies would all have a negative impact on my spirit. But I’m glad I visited, and I sure wouldn’t mind seeing Ketchikan and Glacier Bay again.