I always thought the Pokemon franchise was for little kids. Cartoons. Trading cards. The stuff of childhood. If I’m honest, I never paid it very much attention.

Then I placed a little free library in front of my house. We get a lot of foot traffic, so a lot of books are coming and going, which is fantastic. But of course, the goal is to encourage as much reading as possible, so I was casting about to find ways to attract more people to the library, especially younger readers, and one suggestion was Pokemon Go.

For the uninitiated, as you go about your daily life, the Pokemon Go avatar that you create in the game is also walking through a parallel world. If you’re walking down a street, that same street exists there. The difference is that there are pokestops within Pokemon Go where you can receive gifts and gather points. These pokestops correspond to landmarks in the real world. Public art. Historical markers. Starbucks coffee shops. Churches. Playgrounds. And, yes, little free libraries.

Players of this game are drawn to these pokestops. I want them to be similarly drawn to my library. But, how do I make my library a pokestop? Obviously, I had to put the game app on my phone. I did so. But I couldn’t find any way to suggest a pokestop.

After a little bit of internet research, I discovered that you have to get to level 40 in the game to make such suggestions. Well, alrighty then. I guess I’ll play Pokemon Go. Just for the sake of my library, of course.

But who am I kidding? By the time I reached level 5, I was hooked. I enjoy encountering, capturing and collecting the “POKEt MONsters.” Each one is unique. I enjoy visiting the pokestops and learning about places I may have otherwise overlooked. I like being part of this secret, all but invisible world.

And by the time I got hooked, I discovered that Niantic, the Pokemon company, only allows a few countries at a time to suggest pokestops, and the US is not currently one of those. I also discovered that each level is harder to get past than the last, because you have to get an increasing number of points. At this rate it will take me years to reach level 40. I only hope that the people in the US can make pokestop suggestions by the time I reach that point.

The frustrating thing is that I’ve seen little free libraries that have pokestops. How did they get them? I don’t know. If there’s anyone out there who has the ability to create a pokestop, please, I’m begging you, contact me. I’ll give you all the information you need.

In the meantime, I play on. And I’ve discovered that this game has a lot going for it. If I had a child, I would be thrilled if Pokemon Go were a part of his or her life. Here are some of the benefits of playing this game:

-First of all, and foremost, as far as I am concerned, is that Pokemon Go encourages walking. That’s outstanding in this couch potato world we’ve created for ourselves. You need to get out there to visit those pokestops. Also, if you obtain an egg, which will eventually hatch into a pokemon, you have to walk a certain distance to “incubate” that egg. And the more places you go, the more pokemon you encounter. I have actually lost three pounds since I started playing this game, and that’s even more remarkable when you consider the fact that I took a week-long, food-ladened cruise during that period.

-Second, it broadens your horizons. Not only are you discovering interesting places that have been right under your nose this whole time, but you also “meet” people from places you’ve never been. You rapidly discover that the best way to succeed in the game is to have friends with which you can exchange “gifts”. You can obtain free gifts to give to friends at pokestops.

But how do you make these friends? If you’re an adult like me, it would be a little creepy to hit up random children for friend requests. (I’m also hesitant to spend too much time at playground pokestops. It just looks weird.) So instead, I put my Pokemon friend code out there on Facebook and got a few that way. But only a few.

But then I got smart. I googled “Pokemon Go Friend Codes” and discovered this website. From there, I’ve made friends from all over the world. Not a day goes by when I don’t receive “gifts” from these friends, and the gift includes a little postcard from the pokestop where they obtained this gift. As I wrote this, I got a postcard from a quirky little statue in a small town in Portugal. Now, how cool is that? And it’s perfectly safe to make these friends. You’ll never actually communicate with them. They’ll never know your real name or contact information. It’s just fun to get the occasional cyber-hello from another part of the planet. (Incidentally, if you play Pokemon Go, my friend code is 2823 6831 5660. Friend me!)

Pokemon Go teaches you a lot, as well:

Perhaps the one downside to this game is that if you do struggle with delayed gratification, there are plenty of opportunities to spend money to get to where you want to be. It’s possible to play this game without spending a dime. It just takes a lot longer. This is a temptation I wrestle with whenever I play.

Perhaps the weirdest aspect of this game is that some people protest that it encourages animal cruelty, because you capture these pokemon, and you can battle with them. But this is a far cry from dog fighting. There is no glorification of blood and guts in this game. And I think that any child who is mentally healthy can distinguish between a cartoon monster and the family pet. Give kids a little bit of credit. Sheesh.

To summarize: A) Please make my little free library a pokestop if you have the ability to do so. (And my bridge, and the statue just north of my bridge, if the spirit moves you.) B) Friend me if you play, and C) have fun while learning stuff.

Oh, and pay attention to your surroundings so as not to walk out into traffic and get yourself killed. Because that’s no fun at all. And I’d really feel horrible if you did. 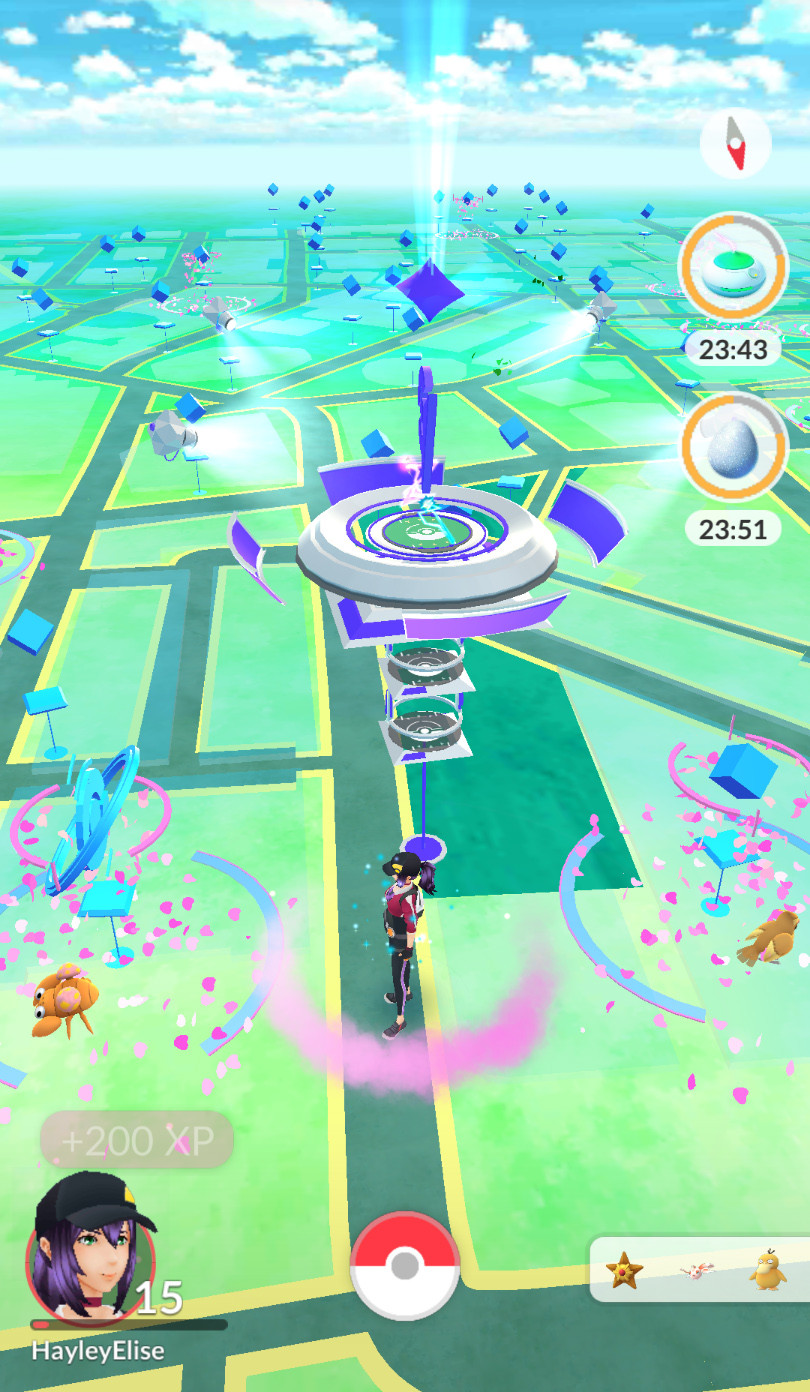 3 thoughts on “The Benefits of Playing Pokemon Go”