Every once in a while, I’ll drive past a pretty little park in downtown Seattle. I keep meaning to stop and check it out on foot, but that would require parking. And this is a city where parking is hard to find, and expensive when you do. So I’ve contented myself with merely admiring this place as I rush past. But now that I know more about it, I’m definitely going to have to change that.

It’s a park with four lovely old pillars, standing all alone, like soldiers. They prop up nothing but the sky. This park is a tiny respite from the urban sprawl while also presiding over some lovely views. In addition, apparently, it’s a dog park, and I’m all for those.

But recently I came across this post in Atlas Obscura. (It’s a fascinating website, by the way. Check it out. You’ll learn stuff.)

This particular post describes this park in more detail, in all its fascinating historical context. The pillars in the park used to grace the front of the Plymouth Congregational Church, whose congregation first started meeting in Seattle in 1869. The church was known for its stance on social justice issues.

At a time when Seattlites were expressing their hatred of Chinese immigrants, this church supported immigrants’ rights. They also supported women’s suffrage. Later, they hosted Martin Luther King Jr. during his only visit to Seattle.

Sadly, the church had to be demolished after the 1965 earthquake, but the congregation donated the 4 original pillars to the city, and they now stand in this lovely little park. The church is still going strong in a new location. That makes me happy.

Now, as I pass this park, I will think of it as part of Seattle’s liberal legacy. I’ll gaze on its elegant beauty, and smile even wider than I used to. When you think about it, history is everywhere you look. Sometimes you just have to do your homework. 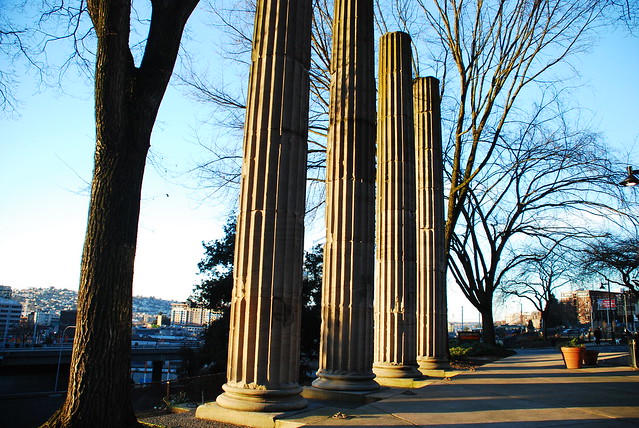