When I was 15 years old and a sophomore in high school, I had a crush on a guy named Howard. We sat at the same table in English Literature class. We always had fun together. Even though we were just friends, I was grateful to have someone to romantically obsess over. It took my mind off my dysfunctional home life.

One time, as the teacher blathered on about some classical poet who interested me not at all, my thigh happened to accidentally touch his. It was like the best electric shock imaginable. My hormones were already off the charts at that age. But this was epic.

And the most amazing part was that he didn’t move his leg, so neither did I. We sat there through class that way, and I was swimming in a veritable sea of lust, thinking, “Omigod, He likes me back!”

It never occurred to me that that could be possible. No one in school had ever expressed the slightest interest in me. My self-esteem was so low that my main goal was just trying to get through the day without humiliation. On that day, though, nothing mattered but Howard’s thigh.

I got to class early, and was talking to Howard and another boy who sat at our table, and the boy blurted out, “You should go to the dance with Howard!”

But again, dead silence. Awkward. I thought that maybe he wanted to ask me when no one else was around. Or maybe he didn’t like me after all. Or maybe he was just too shy. Should I ask him? I didn’t have the courage.

No need to keep you in suspense. Howard never asked, and I never went to a high school dance, ever, because he was at the head of a long line of people who never asked.

Howard and I remained friends for the rest of the year. We pretended that the situation had never come up. A lot went unsaid, it seems.

At the end of the year, he mentioned something about being best friends in my yearbook. I was just looking at it the other day. It made me smile.

But we didn’t stay in touch over that following summer, and the next year he didn’t come back to school. I never knew what happened to him. I always wondered.

I hadn’t thought about that in years. I have no idea why it popped into my head the other day. I had given myself closure by thinking that, yes, he did like me, but he was too shy to do anything about it. What a shame, I thought. What a waste. But life goes on.

But of course by now I was thinking about this in terms of a blog post, and I wondered about his side of the story. I thought it might be cool to seek him out on line and ask him. With time and distance and zero desire to pick up where we left off, maybe we both could provide some insight for each other. If he even remembered me, that is.

So I Googled him. Unfortunately, he has a fairly common name, so this wasn’t going to be as easy as I thought. Add to that the fact that his picture doesn’t appear in the yearbook for some reason, and to be perfectly honest I can’t remember what he looks like, and you can see what a challenge this could be. There were too many people with his name on Facebook.

Even so, I’m pretty sure I found him. A business license revealed a person who lives one town over from the high school, and he’s the right age. I looked on Facebook again for someone from that town, and there was the guy with the business in question, and yes, he mentioned my school in his profile. While his picture didn’t ring any bells at all, he would have been my type.

I sent him a message, but I get the impression he doesn’t Facebook much, so I’m not holding out much hope of an illuminating conversation. And yet I learned a lot from his Facebook page. It fills in much of the blanks in our story. It has taken a turn I hadn’t anticipated.

It seems that Howard likes men. Which means, most likely, that he did back then as well. But in the early 80’s, that’s not something that he would have put out there for general consumption, especially in the rural South. It’s not something that even occurred to me to think about, really. If you had asked me at the time, I wouldn’t have had a problem with anyone in the LGBTQ community. It just seemed as exotic and out of my realm as the Dalai Lama.

I have no idea if Howard was struggling with his sexuality when I knew him. I hope not. But clearly he had me in the friend zone. But that, in retrospect, was a precious gift.

I wonder what he thought of the thigh incident. Was he appalled? Completely turned off? Afraid to pull his leg away for fear of revealing himself? Or was he simply confused? I hate the idea that while I was swimming around in my sea of lust, he was bobbing in a pool of uncertainty or disgust. Wherever he might have been, mentally or emotionally, the touch I was giving was not the touch he was receiving.

I hope I wasn’t torturing him. That certainly wasn’t my intent. I am horrified to think that I was sexually harassing him without knowing it.

At least now I know why he never asked me to the dance. It wasn’t about me. But with hindsight, we could have gone as friends and had a great time.

At least now I have a few more answers. I’d love to renew my friendship with Howard. I’m sure we’d have a lot to catch up on. Either way, I will always wish him well and be grateful that he gave a lonely 15-year-old girl something to daydream about. 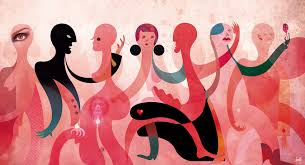