I have always been drawn to the Medieval era of European history. I even prefer the Celtic font above all others. If reincarnation is actually a thing, I often imagine I was a dangerously smart, albeit uneducated, woman back then. Nobody famous. We can’t all be kings and queens. No, I would have been a farmer’s daughter or a milk maid, and my life would have been nasty, brutish and short, but I’d have been a leader for all that. I love reading everything I can about that period. It feels strangely familiar to me. Like home.

So I was really excited to see this article, entitled The Medieval Masterpiece, the Book of Kells, is Now Digitized & Put Online. I’ve long thought this was the most beautiful book on earth, and I’m not alone in that assessment. It’s the most elaborate illuminated manuscript extant, and now, for the first time, we get to gaze upon every bit of it, all 680 pages, online, for free, here. What a treasure.

This book, believed to be from around the year 800, wasn’t really created to be read. It is a work of art, first and foremost. The illuminated portions of the text are so abstract as to be nearly illegible, and it’s quite clear that the rest of the words weren’t taken very seriously by the scribes. It basically is the four gospels of the new testament, but whole sections are missing, and long passages are mistakenly repeated, and some are even paraphrased, as if taken from memory rather than the source. Page numbers, added much later, include a duplicate page number. According to Wikipedia, the tables included in the Book of Kells, meant to allow the reader to cross reference the gospels, a table of contents of sorts, are actually useless since the chapters were never numbered. This book was all about the illustrations.

We cannot be sure how much of the book is missing, but the current tome ends partway through the gospel of John, and it’s believed that several of the illuminations have been “lost”. And by lost I assume stolen, because how do you lose one page of a book and not another? I admit that these illuminations are definitely suitable for framing. (I wouldn’t mind having one as a tattoo, if I could put up with the pain and could find an artist capable of such outstanding work.)

While researching this post, I also came across a feature length, award-winning animation entitled The Secret of Kells. I’m really surprised it isn’t more well known. It’s a fictional story, inspired by the book. You can see shadows of the book’s art in its brilliant illustrations. The music and the story are a surreal delight as well. I highly recommend it.

It really makes me happy, knowing that such beauty as the Book of Kells exists in this world. Humans aren’t merely destructive after all. We are capable of creating things that are magical. This gives me hope. 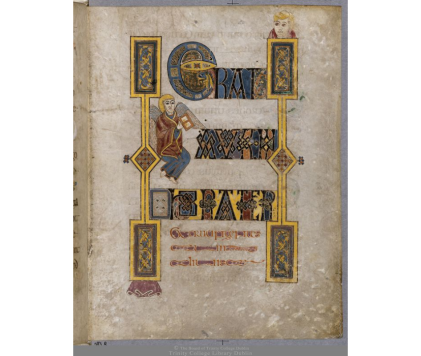