As a bridgetender, whenever my travels take me anywhere near a movable bridge, I have to check it out. And the Hood Canal Bridge, which connects the Olympic and Kitsap Peninsulas in Washington state, is a unique bridge indeed, with an interesting history. The entire bridge is 7,869 feet long, and 6,521 feet of that floats. It’s the third longest floating bridge in the world, and the longest one located in a saltwater tidal basin.

The reason it was made a floating bridge is that the water depth ranges from 80 to 340 feet, and therefore support columns would have cost a fortune. Not that this bridge has been cheap by any means. The floating design has always been controversial because the tide difference averages 16.5 feet, and the wind, weather and current in the area can be rather severe.

The bridge first opened to traffic in 1961, and did well, until February 13, 1979. That’s when a disastrous windstorm with sustained winds of 85 mph and gusts up to 120mph hit the bridge broadside. The bridge was closed to traffic, and drawspan sections of the bridge were left open to reduce water pressure, but the western half of the bridge broke loose and sank. Fortunately the bridge crew and all members of the traveling public were off the bridge by then, so there were no casualties.

It took nearly 4 years to replace the span, and during that time, people either had to take a 50 mile detour or ride the hastily reestablished ferry system. The ferry took some time to set back up as the state had to reacquire the land and build the needed infrastructure. The bridge replacement cost 143 million dollars.

They then replaced other portions of the bridge from 2003 to 2009 to the tune of 471 million dollars. The pontoons and anchors for the bridge were built off site, and they had to relocate that site after two weeks when it was discovered that they had uncovered an ancestral burial ground belonging to the Lower Elwha Klallam Tribe. Not only did they have to purchase new land and relocate, but they had to rebury all the remains that had been uncovered and pay the tribe 2.5 million dollars in damages.

What interests me in particular about this bridge is the movable span. It is one of the few movable bridge designs that I’ve never had the opportunity to operate. I would love to!

The hood canal bridge doesn’t open very often. You have to make an appointment at least an hour in advance to get it to do so. And then, it’s a fascinating process. Check out this video if you’d like to watch an opening with an explanation. And here’s an explanation from WSDOT (Washington State Department of Transportation:

How long does it take to open and close the Hood Canal Bridge?

The length of time it takes to open and close the Hood Canal Bridge for a marine opening can vary from about ten minutes to 45 minutes.

To open the bridge to allow marine traffic to pass (as required by the Coast Guard), WSDOT has three spans on each side that are hydraulically raised. Once they are raised, the floating spans can be retracted back under those spans to provide the opening. Depending on what type of vessel is passing through, WSDOT may only have to retract one side of the span. If it is a sail boat that darts through, we will only open one side and it will take less time for traffic to get moving again.

Submarines and the support vessels that accompany them take longer and require both sides to be retracted. Submarines are not very maneuverable on top of the water and they will request the opening early. Ahead of the submarine will be smaller escort vessels that cross through first and then the submarine. As soon as all the vessels are through, the operator will start the closure of the two 300-feet floating spans moving towards each other. These are massive and take time to get moving and then slow down until they are together and locked. A crew member verifies that the lock is engaged, and then the three spans on each end of the opening that were raised up for the opening, these will be lowered back down. Once they are in place, the gates can be opened to vehicle traffic.

If there are any malfunctions in the system, the process will take longer. There have been times when cars would not start after they stopped for the bridge opening. This can also cause a delay in the time to clear traffic.

You can read a lot more interesting questions and answers about the hood canal bridge here. It also includes a link to live traffic cameras if you’d like to see what’s going on right this minute. Meanwhile, here are some of the pictures I took while crossing this fascinating bridge. I hope you get to cross it, too, someday. 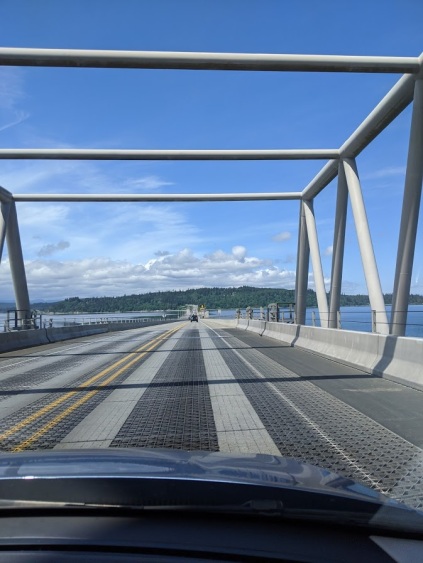 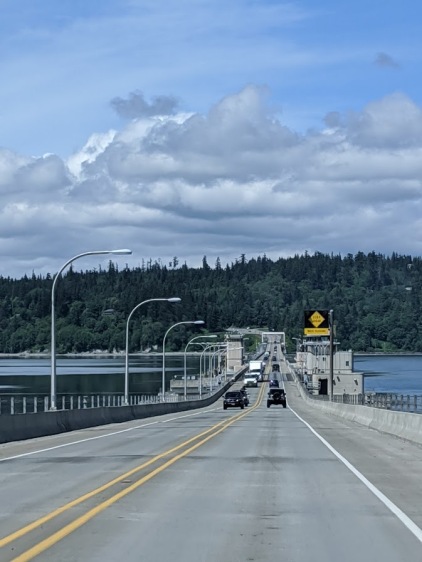 3 thoughts on “The Hood Canal Bridge”