On this day, 202 years ago (July 1, 1818). Ignaz Semmelweis was born in Budapest, Hungary. Because he was born, billions of us are alive to celebrate that fact. That makes it all the more astounding to me that maybe only one in 10,000 of us even know that he ever existed.

Semmelweis became a doctor in 1844, and specialized in obstetrics in Vienna. As the chief resident at the Vienna General Hospital, he began to notice something very strange and disturbing. There were two maternity clinics at the hospital, and women were dying 2 ½ times more often at one clinic than at the other.

These deaths were attributed to puerperal fever, or childbed fever, which had been around since the 1600’s. (It’s a horrible way to go, involving a great deal of pus. I’ll leave it at that.)

Women were more likely to survive if they gave birth in the street than if they went into the hospital. That reputation was not lost on the public, and women used to beg, on their knees, to be admitted to clinic 2, if they had to be admitted anywhere at all.

Why was this happening? No one knew. And that bothered Semmelweis more than a little.

He began comparing the two clinics, trying to determine the difference between them. The first, more deadly, clinic was staffed by medical students. The second was staffed by students of midwifery.

The second clinic was the more crowded of the two, so these deaths couldn’t be due to crowding. And the discrepancy had nothing to do with climate, because that was the same on both wards. For a time, he was even desperate enough to try to blame it on religious differences, but he got nowhere with that theory.

Then one day in 1847, Semmelweis’ good friend and colleague, Jakob Kolletschka died, and his autopsy showed that what killed him looked identical to puerperal fever. How was that possible? He had been accidentally cut by a med student’s scalpel during a post mortem exam, and he died not long thereafter. What did that have in common with childbirth?

That made Semmelweis realize another difference between the two clinics. The med students often would perform autopsies in the morning, and then interact with the pregnant women in the afternoon. The midwives, on the other hand, did not do autopsies. Semmelweis began to wonder if puerperal fever was the result of some kind of cadaverous particle that was being transferred from the corpses to the pregnant women via the medical students.

It is important to mention here that germ theory was not accepted in Vienna back then. No one understood the importance of sanitizing the wards or washing one’s hands. Women often lay on soiled bed sheets, and doctors would treat them while still wearing aprons bloodied by autopsies.

Semmelweis instituted a policy of washing one’s hands in chlorinated lime, mainly because he noticed that this removed the autopsy odor. No more putrid smell of infection. Perhaps this would remove the cadaverous particles, too.

Lo and behold, the mortality rate dropped by 90%, just like that. He set out to tell the medical world about this. You’d think a drastic reduction in deaths would have everyone jumping on the bandwagon right away, wouldn’t you?

But no. His theory was considered radical. How could a particle from a corpse turn you into a corpse? And it was an insult to doctors everywhere, who did not want to think of themselves as dirty.

Semmelweis’ breakthrough was ignored, rejected, or ridiculed by the medical community at large. During all this, and amidst a heaping helping of political turmoil, he was dismissed from his job and finally was so harassed that he moved back to Budapest.

He continued to achieve positive results everywhere he worked, and yet he was not taken seriously. This, understandably, did not sit well with Semmelweis. He began to fight back, by writing openly hostile letters to obstetricians, calling them irresponsible murderers. He fell into a depression and started drinking.

People began to think he was going nuts, and perhaps he was. In 1865 he was committed to a lunatic asylum after trying to convince people of his breakthrough, to no avail, for 20 years. How heavily it must have weighed on him, watching women die for entirely preventable reasons that whole time.

One of his friends lured him to the asylum under false pretexts. When he realized this, he tried to leave. He was severely beaten by the guards and thrown into a straitjacket. Two weeks later, he died of septic shock, most likely from the wounds he obtained during that beating. What a bitter irony. He was 47 years old.

It’s hard to believe that people were willing to overlook the fact that, after he left each one of his clinics, mortality rates skyrocketed again. A few decades later, Louis Pasteur further developed the germ theory of disease, finally explaining the actual science behind it, and people began to realize that perhaps Semmelweis had a point.

The home where Semmelweis was born in Budapest has now been converted into a museum and library to honor him. A university was named after him in the same city, as was a clinic in Vienna and a hospital in Hungary. His face is on an Austrian commemorative coin. A minor planet was named after him. He has his own Hungarian postage stamp. He has even become a Google Doodle.

Per Wikipedia, there’s a name for “a certain type of human behavior characterized by reflex-like rejection of new knowledge because it contradicts entrenched norms, beleifs, or paradigms.” It’s called the Semmelweis Reflex. How’s that for a legacy?

Anyway, I was thinking of this tragic man as I washed my hands for the umpteenth time today. How proud he would be of all of us who are continuing to battle against our current pandemic. How surprised he would be that so many people are turning those efforts political and resisting these efforts to save lives.

Next time you wash your hands, say, “Thank you, Ignaz Semmelweis!” He struggled his whole adult life to get us to see the importance of these things. Please don’t let his efforts be in vain. 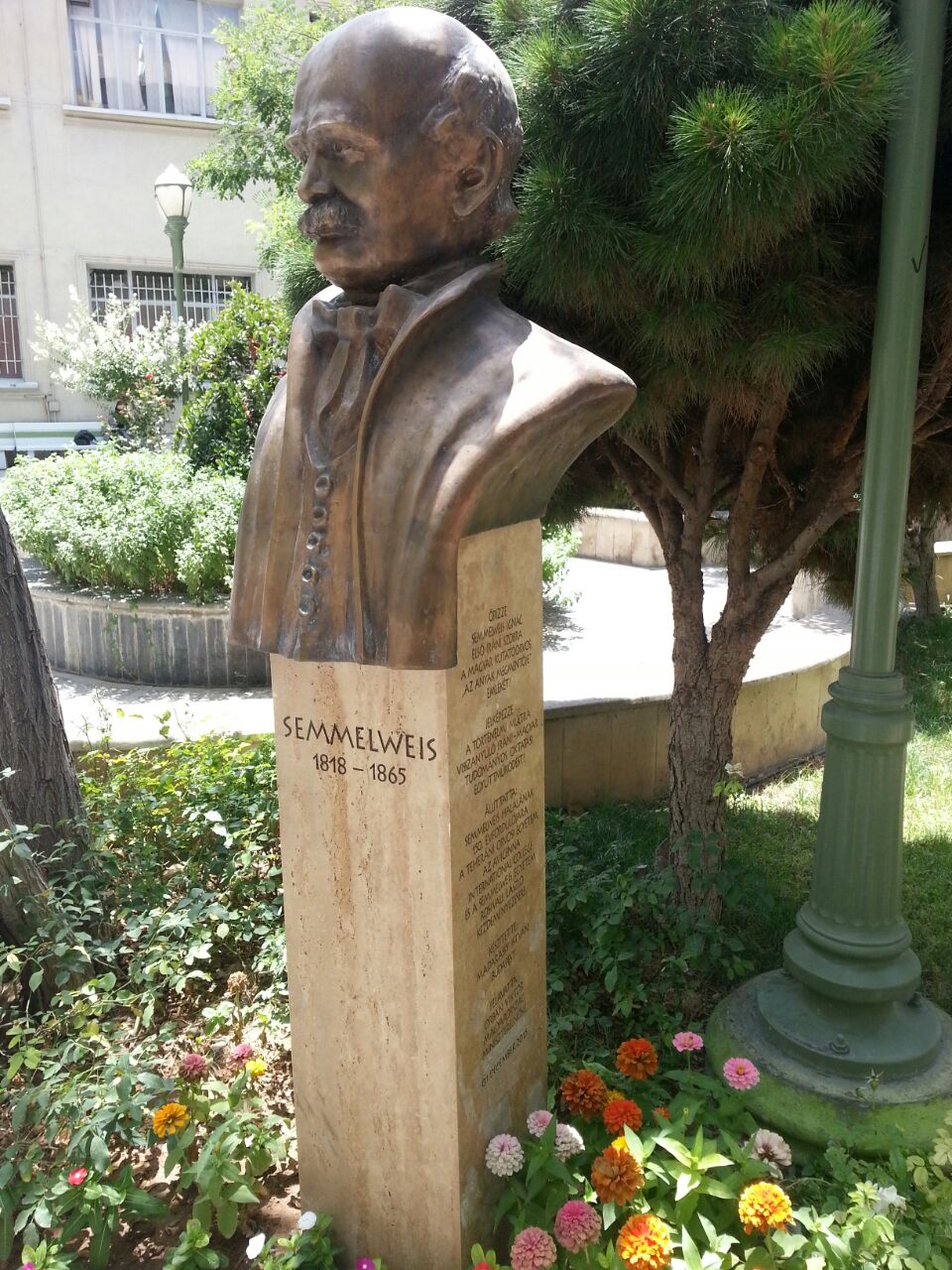 2 thoughts on “Ignaz Semmelweis and His Cadaverous Particles”