A few days ago, I voted in a primary and special election here in the Seattle area. They really make it easy here. You vote by mail, and they provide you with a nice thick pamphlet which tells you everything you need to know about the various candidates and issues.

People in the State of Washington really have no excuse not to vote. It’s not like you have to stand for hours in a blistering hot parking lot, waiting for the chance to vote, and have to conduct hours of independent research to know who to vote for, like I did for decades in Florida.

The pamphlet for my area was 91 pages long this time around. I adore these pamphlets, because they help me do my homework on the candidates. I can eliminate many people on their statements alone, and then do further research on the more serious ones if I feel the need.

But I also enjoy the pamphlet because there are enough loony candidates to turn it into a joke book. Anyone can run if they meet the requirements. But jeez, it really makes you wonder why certain ones bother.

For your amusement, here are some of the more lunatic fringe candidates (in my opinion) running for office here in the Seattle area, and some quotes directly from their statements as included in the voter’s pamphlet. Suffice it to say, I voted for more sane, serious, and qualified candidates than these.

Don’t you just love the democratic process? Who says voting is no fun? All jokes aside, though, I’m sitting here poking fun at these people under the assumption that a nut can’t possibly get elected. But I thought that in 2016, too. 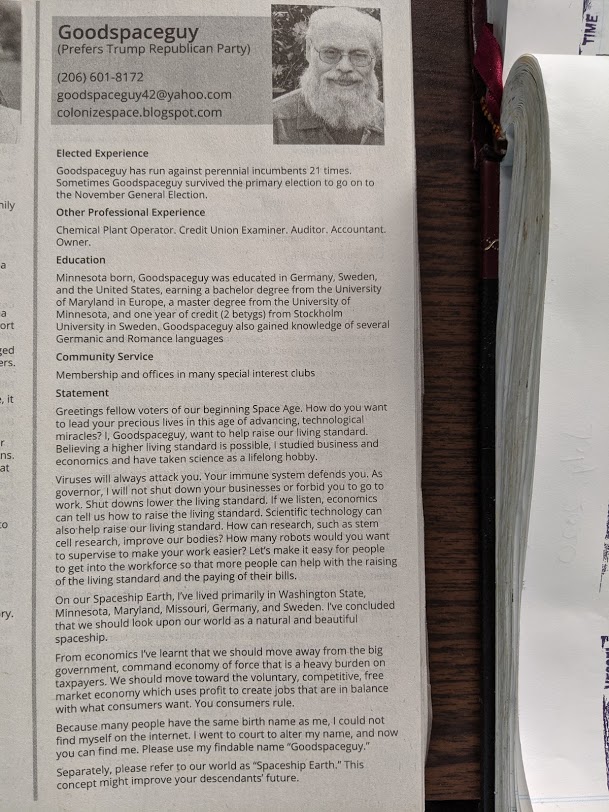 Like this quirky little blog? Then you’ll love this book! http://amzn.to/2mlPVh5

6 thoughts on “Loony Candidates of the Pacific Northwest”