In this time of ever-increasing homelessness, we need to come up with affordable housing solutions. That’s an indisputable fact. But how much are we willing to sacrifice in terms of comfort and livability to come up with such housing? Because solutions are out there. They just may not be acceptable ones.

Take, for example, the ideas of Wallace Neff, architect to the stars in the 1930’s. According to this fascinating article, Neff was the designer of the Pickfair Mansion, the highly acclaimed home of Douglas Fairbanks and Mary Pickford, which was unfortunately demolished in 1990. He also designed homes for Charlie Chaplain, Judy Garland, and Groucho Marx.

But Neff is also known for inventing bubble houses. There was a housing shortage during and after World War II,  and Neff, who highly prized social responsibility, turned his talents toward solving this problem. What he came up with was rather ingenious in terms of low cost, easy to build structures.

It takes two people less than 48 hours to build a 1000 square foot bubble house. First, you pour a circular foundation. Then you attach a huge half circle balloon to it. You coat the balloon in powder. Then a substance called gunite, a type of powdered concrete, is shot over the balloon, along with water. That is then covered with wire mesh, and once that layer dries, a second coat is applied. Once it’s dry, you deflate the bubble and pull it out of the doorway for reuse.

You can also construct several bubbles and connect them with concrete block hallways to increase the size of your dwelling. Simple, efficient, affordable housing. Who could ask for more?

The first colony of these houses was in Falls Church, Virginia. It was soon nicknamed “Igloo Village”. Another went up in Litchfield Park, Arizona. Loyola University made a dormitory out of these bubbles. This was turning into a bit of a big deal.

But here’s the problem with these bubble houses. They have no straight walls. You can’t hang pictures. All the rooms are circular and it’s hard to find furniture that fits well within them. They are damp. They don’t have many windows. They have weird acoustics. They’re hot, uncomfortable, and annoying. They’re also funny looking and tend to attract unwanted attention. And they all look pretty much identical.

Eventually every American bubble house was torn down except for the one in Pasadena, pictured below. Wallace Neff lived in that one until his death, and it is still occupied to this day, by someone who could afford to have custom furniture built. It was a good, bad idea that never got traction in this country.

Bubble houses are more popular in the developing world for obvious reasons. You can still find them in Pakistan, Egypt, Liberia, Jordan, Turkey, Kuwait, South Africa, The Virgin Islands, Nicaragua, Venezuela, Cuba, and Brazil. The largest colony is in Dakar, Senegal.

I suspect that we could take this bubble house idea and make something more of it in modern times. I bet we could make other shapes, and use other materials, and allow these houses to be more culturally relevant and more adaptive to the environments in which they’d spring up. I think this concept should be revisited.

One thing is certain: I’d take a bubble house over a park bench. But homeless people, just like any other people, should have a right to reside in something comfortable. So let’s take this good, bad idea, and turn it into a good idea. There must be a way. 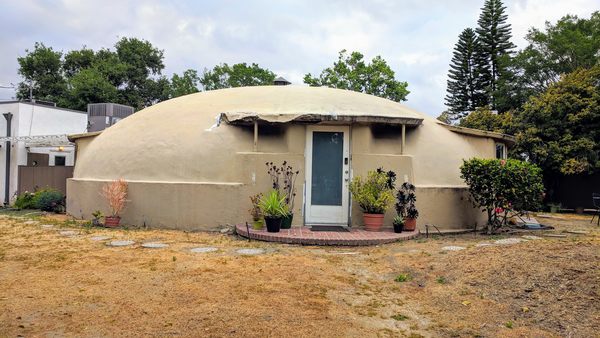 Like this quirky little blog? Then you’ll love this book! http://amzn.to/2mlPVh5