You know shit is getting real when your doctor actually prescribes that you don’t watch the news for a week. Between North Korea and Puerto Rico, my blood pressure is higher than it ought to be. So let the news blackout begin.

For those of you in the helping professions in particular, vicarious trauma is a problem that should be taken very seriously. Counselors, health professionals, firemen, police officers, social workers, soldiers, even journalists get exposed to other people’s trauma on a daily basis, and unless they have hearts of stone, these experiences, albeit secondhand, impact them as well. More and more, as all of us have greater access to disasters on a global scale, I’m beginning to believe that every single one of us is exposed to vicarious trauma.

Do you ever feel like you just can’t listen to one more news item without losing your mind? Are you convinced that one more presidential tweet just might send you over the edge? Hurricanes, earthquakes, floods, forest fires… the overwhelming number of Youtube videos showing animal abuse and neglect… it is just too much to take in.

Think of trauma like a pebble thrown into a pond. The ripples that flow outward from that pebble effect all of us. It feels like we can never do enough. It’s exhausting. It makes you feel guilty, or afraid, or angry, or cynical. Sometimes it makes you feel numb, or helpless, or hopeless.

All of these are natural responses to vicarious trauma, but they’re not particularly helpful. It’s important that you learn to practice compassion for yourself as well as for other people. Give yourself a break. Be kind to you. Be sure to give yourself opportunities to engage in things outside your work, or outside the news. Set the burden down every now and then. Center yourself with family and friends. Get local. Allow yourself to have limits.

Most of all, talk to people. You are not alone. We are all getting a bit burned out. We need each other to weather the storms.

We’ve had our fair share of natural disasters this year. But when you pair that with an increasing disregard for workers, you get a toxic combination. People are getting fired for having to mandatorily evacuate and therefore being unable to show up for work. People have been forced to work in extremely unsafe situations, leaving their families at times when they’re needed most. When human life stops being the most important factor, we have reached a new low.

What follows is a letter I was forced to write back in 2008, when I was a bridgetender in Jacksonville, Florida, and the Florida Department of Transportation put my life at risk. As per usual with them, I never got any response, and there seemed to be no consequences. I hope they are treating bridgetenders more fairly now, as these disasters increase in frequency. But I doubt it.

Hurricane season is once again upon us. As a bridgetender who had to work at Ortega River Bridge in the early morning hours of Friday, August 22nd during the very worst of Tropical Storm Fay, I feel compelled to give you some insight as to what that was like.

I had to drive to work in 50 mph winds, detouring around downed trees and power lines, and then walked up the bridge to the tenderhouse, getting drenched in the process, and nearly being blown into the street on more than one occasion, only to find out that the coast guard had closed the bridge to boat traffic. I was informed that FDOT was aware of this, but since your wind meter did not match the speeds registered by the one in the tenderhouse, you decided we had to work.

Every weather channel said that the winds were going to be at least 50 mph. Clearly the Coast Guard believed this and took boater safety very seriously. Apparently, we were only there to monitor the radio, but the only transmissions I heard all night were the many Coast Guard announcements that informed boaters of the bridge closings, because no boater in his right mind was out in that weather. No cars were out either, except for the bridgetender who was compelled to relieve me at the end of the shift.

During the entire length of my shift, surrounded by electrical equipment, I was forced to mop water down the hatch and bail as it literally poured in the doors, windows, and through the air conditioner. At one point the heavy traffic cones and life ring blew into the street and I had to wrestle them indoors. Not only should the traffic gates be secured in such weather, but also the traffic cones, life rings and convex mirror should be stowed indoors to avoid becoming projectiles. Apparently that was left up to me during the height of the storm.

When my bladder could no longer hold out, I was forced to venture outdoors and across the street to the bathroom in a downpour, and once again I was nearly blown off my feet. Had I been hurt, no one would have known for hours. Not once did anyone call to check on me.

In the meantime, the power was continually going off and on, which caused the generator to kick in as I watched transformers exploding on the horizon. I found out the next day that water spouts were spinning up on the river. The wind shook the building and the waves crested over the fenders.

When it was time to go home, I once again had to walk down the bridge, and the wind was blowing so hard that the rain was physically painful. Once again I was drenched as no rain coat in the world can stand up to those conditions, and by the time I detoured around even more downed trees and power lines to get home, my lips were blue from the cold and I had to stave off hypothermia by taking an extended hot bath. Thank God my electricity was not out or I would probably have been hospitalized.

The worst part about the whole experience, sir, was that I spent the entire shift afraid, and my family was afraid for me. And the whole time I kept thinking, “I haven’t had a raise in 5 years, and I have $5,000 in medical debt because of substandard health insurance. Must I risk my life, too?”

I can’t speak for other bridgetenders. I can’t even imagine what it must have been like to climb the ladder at the Main Street Bridge under these conditions. I’m sure my life would have been flashing before my eyes.

I hope you will take this letter into consideration when making decisions in future storms. I hope I never have to have another experience like that as long as I live.

I was sitting with a couple of friends the other day (waving at Caly and Mor) and we embarked on a flight of fancy, a sort of thought experiment about time machines. And now I can’t get it out of my head. I don’t know if this will reveal as much about the subject matter as it does about how my mind works and how I view society, but there you have it.

In most science fiction stories that I’ve read about time travel, the main concerns seem to be changing the future and/or running into yourself. I think there is a lot more to worry about than that. A whole lot more.

I sincerely believe that humanity’s main motivator is greed, so the first thing that people would do is try to figure out a way to make money from this invention. And at first it wouldn’t be very hard. Since today’s money would buy a lot more yesterday, you’d simply have to convert to the gold standard to avoid pesky questions like, “What’s a Euro?” from the people of the 1400’s, and then buy up everything in sight.

Of course, as all the gold flooded into the past, that would make the present time economy rather hard to navigate. So the next step would be making sure that you and yours were well positioned, and the best way to do that would be to give your ancestors an unfair advantage. Get them the gold, have them buy up the real estate, and when the gold runs out, then it’s time to give them modern day weapons. That would make for some scary times. If my AK47 encounters your bow and arrow, who do you think would win?

Another advantage would be in the form of increased health. If you could make sure your relatives thrive during the plague, wouldn’t you do it? And that would definitely put them in positions of power and influence.

And then, of course, there’s the ability to foretell the “future”. As in, you might not want to be in San Francisco on April 18, 1906, when the great earthquake is going to hit. But on the other hand, you could make a fortune selling tents, food and water in the aftermath.

But while predicting natural disasters would remain constant, what would change drastically is human events, as the future would be in a constant state of flux. For example, would World War II occur if a different group of people survived the black plague and produced an entirely different population?

I for one am glad that the laws of physics make it highly unlikely that we’ll overcome the concept of time, because we humans have a knack for mucking things up. I certainly wouldn’t want to be around to see the consequences. 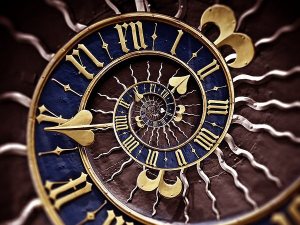