Have you noticed that more and more companies are making it nearly impossible for you to contact them through their websites? Some are particularly diabolical in their plots to tell us all to get stuffed. They provide a contact button, and when you click it, you have two options. Their mailing address (as if any of us write letters anymore) or their help center, in which you can speak to an automated phone system that sends you from one menu to the next, but ultimately does not help you at all, or you can post a message in a community forum where you get to commiserate with all the other frustrated customers out there who also have no idea what to do about their situations.

Am I alone in thinking this is a piss poor business model? I get it. The incessant ringing of the telephone means you actually have to do your job, and that gets expensive. But telling your customers that you can’t be bothered, that you’re happy to take their money but will do little or nothing to serve them, seems like the best way on earth to lose their loyalty. It might even get you the occasional disgruntled, mentally ill consumer visiting corporate headquarters with the ubiquitous AK47.

Ah but in this present atmosphere of monopolies, we, the customers, have fewer and fewer options when we’re dissatisfied. Many cities give you two possibilities for wifi at the very most, for example. So there’s not much we can do other than shout into the phone, “I need to talk to a HUMAN!!!!” and hope the robot will finally see reason.

I long for the day when the pendulum swings back the other way, when companies aren’t allowed to get too big to fail, and, due to the increase in competition, customer service becomes a priority once again. But I’m not going to hold my breath while listening to the Muzak that seems to be the soundtrack of my life these days.

I’m proud to say that my book is available in paperback, kindle, and deluxe color edition! http://amzn.to/2mlPVh5

Okay, I’m horrified. I just learned that the Iron token in the Monopoly board game was retired in 2013. You don’t understand. I LOVED the iron! The iron was my favorite!

Well, I liked the boot, too. And the race car. And the top hat, because it fit on the tip of my finger as a child. But still… the iron? After 80 years, you killed the iron??? Hasbro, what were you thinking?

I’m devastated. I feel like part of my childhood just got assassinated. What’s next? Shall we burn Tony the Tiger in effigy? Will we confiscate every Slinky? Let’s just make Lite Brite monochrome while we’re at it.

Okay, maybe I’m overreacting just a tad. According to this Wikipedia article, a lot of tokens have come and gone through the years. Apparently there was a lantern, a purse, and a rocking horse until the 1950’s. The cannon is now gone, as is the man on horseback. The sack of money had a brief 8 year run, but was retired in 2007. And there have been special tokens that only showed up in special editions, such as the steam locomotive, the robot, the guitar, the helicopter, the ring, and the director’s chair. Also, over time, tokens have been made that were pewter, gold, plastic and wood.

So I guess I can’t really feel so proprietary when it comes to the iron. Life is change. But still, Hasbro, stop messing with my childhood!

Now I can’t get the song “In My Life” by the Beatles out of my head.

Sometime between 1972 and 1975 I went to Towpath Elementary School in Avon, Connecticut. That would have been third to fifth grade for me. I wish I could be more specific but that was so long ago. I do have two memories, though, that are as clear as day.

The first is of Marvin Gordon. We sometimes called him Marvin Gardens, from Monopoly. He didn’t seem to mind. He was the class clown. I don’t know if that was because it came naturally, or if he did that for pure survival. He was the only black kid in the entire school. They bussed him in from a long way away. He was the first black person many of us had ever seen. We used to like to touch his hair.

Everyone seemed to like Marvin quite a bit, but none of us used to really socialize with him. He lived far away, and he was too exotic for the average elementary school student to reach out and embrace. In later years I often wondered what happened to Marvin, and how his time in Towpath shaped him. Does he remember any of it? If I were to meet him again, I would like to tell him that I’m sorry for treating him like some sort of mascot, and even sorrier that I didn’t get to know him better. I wish him well.

The second memory is much more painful for me. At Towpath there seemed to be a very clear divide between the popular kids and the outcasts. I was firmly ensconced among the outcasts. Unfortunately we were not a cohesive group. Last to be picked for any of the typical reindeer games, we tended to be little islands of lonely isolation.

One day the popular kids got it into their heads that everyone should be coupled. It retrospect we were awfully young to be thinking along those lines. I know I certainly wasn’t spending much time focusing on boys. But once that decree came down from the popular crowd, it became law. It was easy for them. The popular girls didn’t lack for popular boys. I don’t think anything really happened in particular. It wasn’t as if there were any kissing or canoodling going on. It was just a matter of status. I remember going home and crying because I didn’t have a boyfriend. I also remember my mother being shocked that I cared.

Eventually it was decided that the popular kids were going to choose couples for the rest of us, the dregs of Towpath society. And since I was apparently the lowest of the low, I got paired up with my lowly male counterpart: Timothy Turkey.

Looking back, I can now see that there was absolutely nothing wrong with Timothy. I’m sure he was a very nice boy. He probably would have made a fine friend. I didn’t really know him. I have no idea why he was rejected, any more than I know why I was. Maybe our mothers didn’t dress us in the right clothes. He seemed perfectly content to be considered my partner, though, even though we never talked.

Everyone called him Timothy Turkey so consistently that I cannot remember his last name. I sure wish I could because I’d try to track him down if I did. Because I did a horrible thing to Timothy, and I’ve felt guilty ever since.

You see, I was desperate to not be on the bottom rung of the social ladder. They used to say, “You can kiss a pig or you can kiss Barbara. I’d rather kiss a pig!” So when they decided I was supposed to be paired off with Timothy Turkey, of all people, I knew that I couldn’t let that happen. It would drag me even further down, I thought. I just wanted people to like me.

So in the twisted logic of an elementary school kid, I decided to call him up and tell him I hated him. And that’s what I did. I had never called a boy before, so I was a nervous wreck. And then to say something like that…I knew it was wrong. And it felt bad. It felt horrible. But I did it anyway. And I have carried that mortification with me ever since.

As a matter of fact, that made such an impression on me that I have never been intentionally cruel like that to anyone since then. I actually tend to collect misfits now. And I stick up for the underdogs of this world. There’s nothing I hate more than a bully.

I only wish I could ask Timothy for his forgiveness, because that was without a doubt the most horrible thing I’ve ever done to anyone. Timothy, if you’re out there, I’m so sorry for what I said. 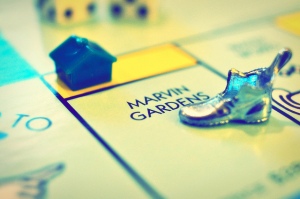 Okay, I’ve already established in an earlier blog entry that I’m no fan of Walmart, but I felt this new development deserved an entry, too. To further their quest for total world domination, Walmart has begun branching out. They call these new stores “Walmart Neighborhood Markets”. Basically they are grocery stores, pure and simple. One just popped up in my neighborhood, like a mushroom, overnight. When I drive by that place it gives me the creeps.

Think about it. When the regular Walmart stores started cropping up everywhere, nobody thought much about it. But then they started appearing in small towns, and inevitably every small mom and pop store within a 10 mile radius wound up closing its doors. They just couldn’t compete with Walmart’s prices and extensive inventory. When those shops closed, the jobs went with them. Sure, a lot of those people got jobs at the Walmart–underpaid, soul-sucking jobs where they no longer had any personal connection with the customers.

Next came Walmart banking, and a scary number of people have put their money in the hands of this corporation, which already controls more money than many third world countries.  And now we have Walmart Neighborhood Markets. Tell me, how long will the other grocery stores in your area be able to compete with that kind of buying power once one of these places arrives on the scene? And once Walmart has wiped out all the competition, they will be in almost total control of your access to food. And they will also be in control of the price of that food.

When Bell Telephone monopolized all US communications, it took the Department of Justice to break it up into smaller companies, most of which are STILL too big for their britches. Imagine the damage a Walmart monopoly could do before our lazy government managed to intervene.

When I drive by this shiny new corporate fungus, I have images of a store stocked with food courtesy of Monsanto and China, at outrageous prices, with lines wrapped around the block. Maybe I’m being paranoid. I hope I am.  But when I talk about this, I kind of feel like Charlton Heston in the movie Soylent Green. He’s shouting, “Soylent Green is People!” to the masses, desperately trying to warn them that their sole food source is actually made out of human beings. Did they listen? Will you?