Here’s an interesting bit of trivia that I recently picked up from God knows where: The English language didn’t have a word for the color orange until the 1540’s. That’s about the time when the fruit started becoming available to Europeans. That fascinates me. And it also answers a question that I’ve had for decades. Why are redheads called redheads when their hair is so obviously orange? It must be because the hair color predates the word.

This also reminds me of a conversation I had with a friend who used to live in Japan. Apparently they see blue and green differently than we do. They describe the traffic light that indicates “go” as blue.

And I’ve often noticed a gender distinction in color perception. Guys invariably describe my hair as black when it’s clear to every female I speak to that it’s brown. I can even stand beside an Asian with black hair, and guys still can’t seem to see the difference. (Soon it won’t be an issue, as I’m rapidly going grey.)

I’ve bumped into this problem with men in all areas of the color spectrum, frankly. I used to think this was pure laziness or disinterest, but I’m beginning to wonder if it’s a genuine difference in color concepts or perception.

All these thoughts sent me scurrying off to what I like to call the font of all human knowledge: Wikipedia. In an article entitled “Distinction of blue and green in various languages” I learned a lot of interesting things. For example, many languages have one word for both blue and green, and you just have to sort it out by context. These include Japanese, Korean, Vietnamese, Tswana and Mayan languages. In Pashto it’s one word, and they’ll then ask, “Green like the sky or green like plants?”

Some cultures don’t distinguish between blue and black. In various cultures, dark skinned people are described as green, blue, black or dusky. In Serbo-Croatian, blonde hair is called blue.

Some languages consider various shades, hues and intensities to be distinct colors, while others consider them a variation on one color. Some simply have suffixes or prefixes to add to color words to make them “light blue” or “dark red”. Interestingly, quite a few cultures distinguish turquoise and teal from other blues.

I like how the color problem is solved in Swahili. It seems they don’t have color words. When they want to describe a color, they do just that. “That shirt is the color of grass.” “Your eyes are the color of the sky.” Every conversation must sound like poetry.

Another interesting Wikipedia article was about the book Basic Color Terms: Their Universality and Evolution. The authors seem to distinguish the level of a culture by the number of basic color terms it possesses. All cultures distinguish between black and white. Then, as they become more sophisticated, they apparently follow the same order the world over. They’ll add red, then either green or yellow, then both green and yellow, then blue, then brown, then purple, pink, orange or grey. English is supposedly the most sophisticated, with eleven basic color terms. 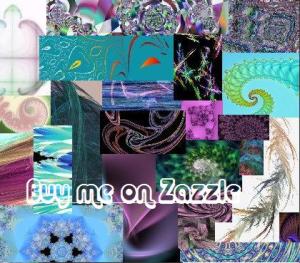 This is one of my fractals, which you can buy in the form of a business card, mug, greeting card, print, or puzzle here. Or check out my entire store, which contains almost 600 fractal products here.

11 thoughts on “Color Me Surprised”