As a bridgetender I get ample opportunity to observe people. I sit up here in my not-exactly-ivory tower, watching them come and go. Most of them don’t even know I exist. That can be lonely, but it also gives me a certain amount of power, and it’s power that I haven’t earned, so I’ve never quite gotten used to it.

People will say the most intimate things as they walk down the sidewalk. I’m not intentionally eaves dropping, but voices do carry. They’ll also do the most bizarre things when they think they’re all alone, so during the early morning part of my shifts on Saturdays and Sundays in particular, when traffic is light and most people are sleeping in or sleeping it off, I’ve seen some quite interesting things.

The other day I saw a guy who appeared to be dancing down the sidewalk. As he got closer I realized that he wasn’t dancing. He was playing imaginary basketball. His dribbling and his overhead passes were particularly graceful. His layups needed some work. He seemed harmless enough, so I let him play on.

On the contrary, shouting man seemed a danger to himself and others. He was disheveled and sucking on a marijuana pipe as he walked along, screaming and gesticulating aggressively. I was tempted to let him be as well, until he straddled the railing into oncoming traffic. That made me call 911. They showed up rather quickly, tested his drugs, talked to him a while, and sent him on his not-so-merry way. That’s the thing about Seattle. The city seems to allow obviously disturbed people to roam free instead of getting them the help that they desperately need. That’s something I haven’t gotten accustomed to. I feel sorry for all the ragged dirty people I see on street corners, talking earnestly to themselves.

There’s another gentleman who is very clean cut, and for all appearances is a functional member of society. That is, until he reaches the informational placard at the top of one of my bridges. It’s tilted sort of like a podium, and he appears to use it as such. He’ll stand there, thumping it with his hands, and speaking loudly and earnestly to the river. There’s no one else around to hear him except me. Sometimes I wonder if he really is a preacher practicing his sermon. He’s too far away for me to hear what he’s saying. Eventually he’ll hop on his bike and ride away.

For the most part I’m a live and let live kind of girl. As long as they are not inviting potential disaster on me, the public, themselves or the bridge, I just kind of shake my head and let them do their unique things. I think all of us, to a certain extent, live in our own little worlds. The majority of us are just a little more adept at keeping it to ourselves. 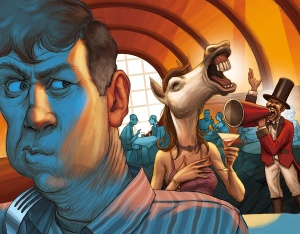