Isn’t nature awesome? It never ceases to amaze me. The natural world is capable of so much more than we mere humans are.

Case in point: Grass. I recently watched my back yard get covered in 9 inches of snow, and it remained in place for a week. While it was beautiful, I couldn’t help wondering what was going on beneath it.

Imagine being covered in a thick, cold, wet, smotheringly heavy blanket. Imagine being plunged into temperatures below freezing for days on end. Imagine not being able to see the sun during that entire period.

And yet, once the grass was exposed again in a thaw that is still making slow but steady progress even as I write this, it was as green and perky as ever. Incredible. Dare I say it? Miraculous.

Okay, yeah, I get it. There is a scientific explanation for it. I have every confidence that this phenomenon can be accounted for. But I’d much rather just gaze at my intrepidly green back yard and consider myself lucky that it is content in its beauty and comfortable in its role in the overall scheme of things. Because if it had a union, it would probably rule the world. 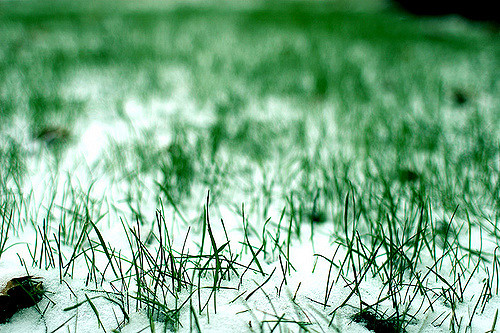