Recently, I blogged about the Capitol Hill Autonomous Zone (CHAZ), a protest society that has sprung up in the Capitol Hill neighborhood of Seattle, which makes me love this city even more. I don’t know how long this little enclave will last, but I was intrigued by the concept. I wanted to bear witness.

I was glad to see that it was still there, even though it has undergone a name change. CHAZ is now CHOP: Capital Hill Organized Protest, because it can’t be considered autonomous in the strictest sense of the word. It doesn’t have its own utilities. It does not maintain its own streets or provide its own bureaucracy. It has not enacted its own constitution. It’s more like a barnacle on the shell that is Seattle, which in turn is a barnacle on the shell of the Duwamish tribal lands. But if CHOP is a barnacle, it’s a beautiful one.

CHOP has three demands: 1) Defund the police. 2) Invest that money in the community. 3) Release all protestors.

Trump would have you believe that a part of the city has been taken over by domestic terrorists, and that if he has it his way, he’ll send in the troops. There’s also this huge rumor that people are toting guns up in there. In essence, that it’s a war zone, all hell has broken loose, and the inmates are running the asylum. I wanted to find out for myself.

The weirdest part about CHOP, as far as I’m concerned, is that there were thousands of people there. Many were lookie-loos like me. Most were masked. But it was the largest crowd that I have been around in months, thanks to the quarantine, and I have to say that it felt exceedingly strange. Such are the times in which we live.

The biggest danger in CHOP, in my opinion, is COVID-19. I didn’t see a single gun the entire time I was there. I saw no violence. The only destruction I saw was the graffiti, which for the most part is really beautiful and well thought out. I felt completely safe.

I was able to listen to several protesters speak. One emphasized that this was a peaceful community. They didn’t destroy. They didn’t burn. And it was obviously true. I also saw a makeshift salon on the street, a circle of couches and chairs, where people were talking about race in the forthright way that you’d never see at a gathering at your average coffee shop. There are several teach-ins going on at any given time at CHOP.

I visited the No Cop Co-op. Free everything. They don’t even accept money in the form of donations. And everyone is welcome to help themselves. I did not do so because I’m sure there are people out there who are more in need than I am.

Cal Anderson Park was full of tents and gatherings. There’s even a vegetable garden starting out there. People were talking quietly. There was no buying or selling going on, and it was refreshing. This wasn’t some festival. These people are seriously wanting to make a change.

If anything, they were earnest to the point of exhaustion. Everyone seemed to be right on point. I did not get the impression that this was a bunch of freeloaders taking advantage of a hassle-free space.

I honestly felt kind of out of place. I was a lot older than the demographic, and a few times I felt like I was being viewed with suspicion. Was I a police or city plant? But everyone treated me, and everyone else, with respect.

I wanted to contribute to the place, so I brought some books to donate from my little free library. One was an anthology of working class literature. But the rest were just, you know, books to read. Because you can’t be on message all the time, can you? Sometimes you just need to read a good book. That was my thinking.

But when I turned them in, the guy at the co-op got a hopeful look in his eye, and asked if it was anarchist literature. Then I felt kind of silly, and was glad that the blush was hidden behind my mask. He was gracious and took the books anyway. I wonder what he did with them.

Hey, you know? You have to at least try. Even if your good intentions miss the mark.

I’m really rooting for CHOP. I walked away feeling like I had witnessed something historic, something important. I certainly know I wasn’t witnessing domestic terrorism.

Here are some pictures that we took in CHOP. I’ll do my best, out of respect for the protesters, to not include any where the unmasked faces are identifiable. 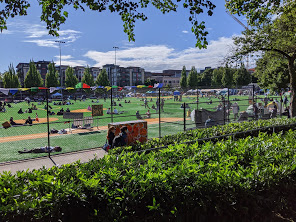 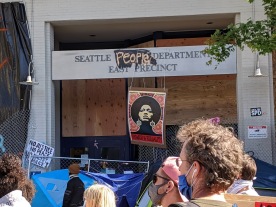 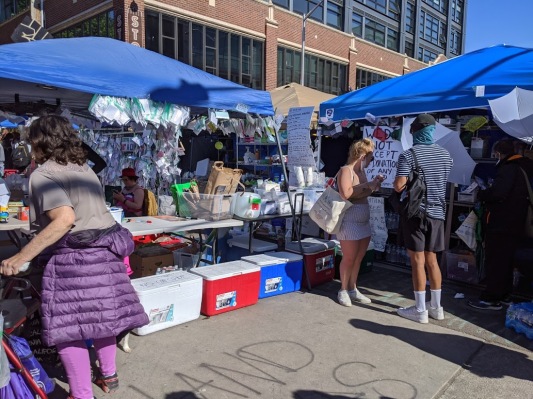 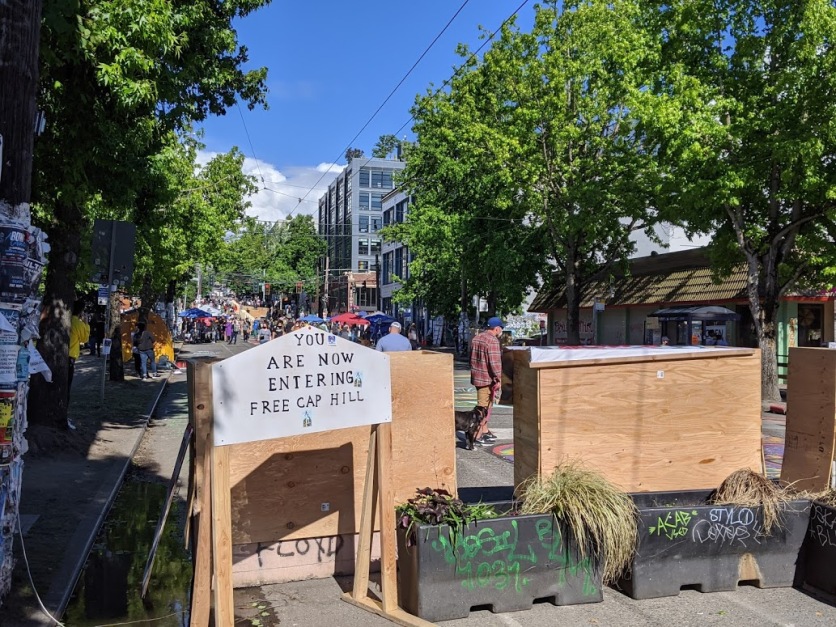 Author: The View from a Drawbridge

I have been a bridgetender since 2001, and gives me plenty of time to think and observe the world. View all posts by The View from a Drawbridge

6 thoughts on “Visiting the Capitol Hill Organized Protest in Seattle”